Is it just me, or is Day Five still showing at the top of the page with Day Six below it? Where will Day Seven end up?? Also: Fridge status still in limbo.

Annie and I awoke yesterday to another cold, drizzly (!), damp, rainyish morning. So we decided to bid adieu to our quaint little Cooper-Young house and head west once more yet again. 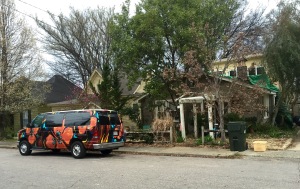 But first, a stop at an intriguing site I’d seen listed on RoadsideAmerica.com – a traveler’s treasure trove of highway hipness like the World’s Largest Ball of Twine and Magic Mike’s House of Mystery. Our destination of choice was the Crystal Shrine Grotto-purportedly a kitschy overdone monstrosity in a Memphis cemetery. What we discovered upon arrival was quite the opposite: a lovely, mystical garden setting, with haunting Zen-like music playing, and formations inspired by Biblical passages like Abraham’s Oak. 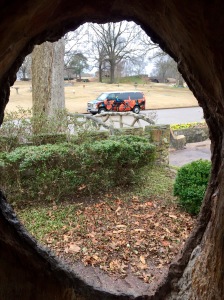 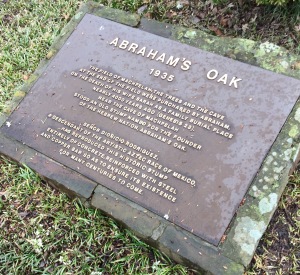 The rain fell harder as we crossed the Mississippi into Arkansas and it was a bleak, nasty slog through the afternoon. Our last sight as we drove over the bridge was The Pyramid, a building with a fascinating history. It’s the sixth largest pyramid in the world-behind only the ACTUAL pyramids and the casino in Vegas-it DOMINATES the skyline. It was opened in 1991, and originally intended to be a college basketball arena, but a mere four years later, Memphis got a pro team, and, I guess no one had thought to make it adherent to NBA standards, so they said screw it and built a whole new stadium down the street. It’s literally been sitting empty for the last 11 years, and is now being tuned into an enormous Bass Pro shop. It boggles the mind.

Shockingly, or maybe it shouldn’t have been, we were a full two hours from Memphis, in a whole entire other state, and I was still seeing things like “Blue Suede Shoes Antiques” with a giant life-size Elvis on the billboard. It was weird enough that any random Walgreens in Memphis had an entire AISLE dedicated to the man, but here in Arkansas?!? He’s been dead almost as long as he was alive! Sure, Elvis was a seminal figure in musical history, a powerful and inspiring performer, and quite a hottie in his day, I get it, but let’s. . . mooove . . .. ON! If you haven’t purchased your commemorative plate or TCB shot glass by now, the window is closing! (Sidebar: of the easily eight or nine different souvenir shoppes at Graceland, not ONE carried any sort of dog accessories. I suspected an Annie-size rhinestone jumpsuit might be too much to hope for, but no food bowl that winds up to play “Hound Dog”?  No “Takin’ Care of Business” poop bags? Come ON! You can’t tell me there is not SIGNIFICANT crossover between the crazy Elvis fan market and the crazy dog person market.

With the rain putting a damper on our plans to make a lunchtime stopover in Hot Springs and explore the country’s smallest National Park, I opted to swing by a Subway for fortification instead. The odd looking youngish dude in front of me was ordering a foot-long sub with the same meat throughout, but entirely different condiments on each side. As I was marveling over that, the man next to him spoke to me. Now this aged specimen was the spitting image of every backwoods Arkansas bumpkin you’ve ever imagined. Thick grizzly grey beard,impossibly filthy trucker hat, limited number of teeth, face caved in on itself like a shrunken apple headed doll. “Which one of you is from California?,” he asks. I realize he means my license plate, so I clarify for him.  He points to the younger dude: “He’s what I did the last time I was in California. *cackle cackle* There’s another one too. *cackle cackle* I fled quickly.

Still not having learned my lesson with Arkansas, I decided to make an unscheduled detour through Hope-the town where former President Clinton was born. I instantly regret it. If ever there were a town that belied its name, this is it. Hope is run down, impoverished, and falling apart. Tattered Christmas banners proclaiming “Hope for the Holidays” still hang. The shops are boarded up, or barred over, or for sale. The wind rattling corrugated tin on the sides of buildings combined with the blare of the train whistle hustles us out of town. 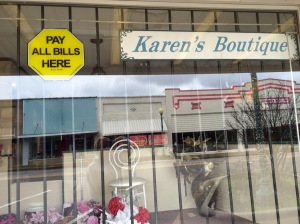 Not long after, the sun finally peeked his head out, and we stopped in to Texarkana, where the border between Texas and Arkansas passes through the courthouse, and Annie had the delight of barking in two states at once. 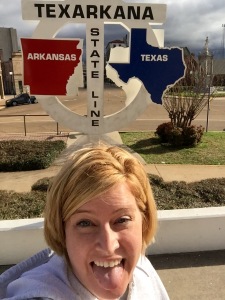 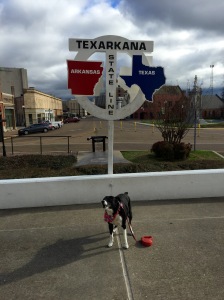 Tomorrow: Texas Messes with ME!