Anyhoo, we awoke to a fabulously glorious (if a tad windy) morning in the Colorado River Recreation Area. Annie and I had such a nice time just pottering about the campsite (as best I can recall four days later) that it was hard to get going. 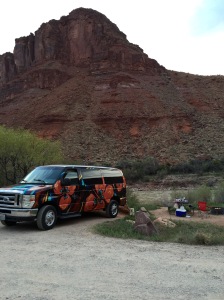 But get going we must! First stop-Arches National Park. Arches is an unbelievably gorgeous area of the desert that is chock full of cool sandstone formations. FULL OF THEM! Many (as you might surmise) in the shape of . . . arches. The ONLY downside to Arches is that they are SUPER dog unfriendly, and Annie wasn’t allowed anywhere other than the car. Mega bummer. Luckily, lots of the cool stuff can be seen by driving the main loop road and stopping at short overlooks or doing quickie 10 minute hikes. And I had something much more fun planned for her later.

Lots of the formations have been given cute anthropomorphic names-which is RIGHT up my alley. Couldn’t get a good shot of the penguin trio who greets you at the entrance, but the grouping on the left here is known as the Three Gossips, and if you squint you can see The Sheep off to their right. (The other photos you can make up your own names for.) 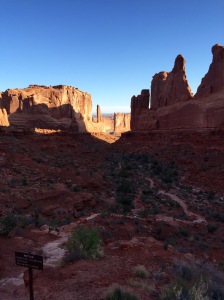 Gotta love a park that gives me a shout out.

Even in the desert you can still find signs of spring. 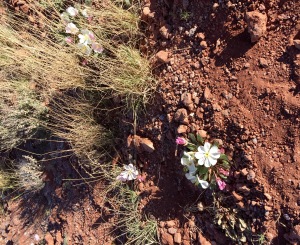 The most famous rock formation in the park, and the one that gets all the pub, is Delicate Arch. Unfortunately, to get a proper look at it, you really need to take the 3 mile STRENUOUS hike that is a mile uphill to get there and means leaving your dog all alone in the van for a few hours while you have fun without her. Not gonna happen. So I took a gander at it from the nearby overlook (which neglected to mention its “stroll” was about half a mile straight up). It’s also where I met Missouri Clinton. Clinton seemed like a nice enough chap, and struck up a conversation with me at the overlook. He was a little gripey though, complaining that he felt all the photos of the arches on signage had been photoshopped to make them seem MUCH more colorful than they actually were. I suggested that certain times of day and lighting could make them more striking, but he would have none of it. Next he declared that Delicate Arch was just too touristy and he was going to go off down a random dirt road instead. Ok then. Clinton seemed to be lingering a bit long, as I was ready to go and he had arrived before me, so I made my exit.

Did I mention it was a bit windy? This area is known as the fiery furnace because at sunset the rocks glow so brightly it seems as if they are aflame (Suck it Missouri Clinton). The cracks and crevices are so narrow and twisty you can only hike down there with an authorized guide. 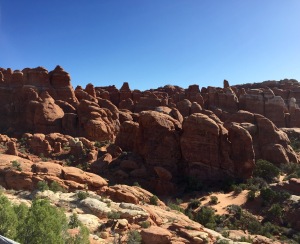 Another super famous formation is Balanced Rock. This one has to be three times the size of the one in Garden of the Gods. Apparently, years ago, some dude insisted there was a layer of concrete affixing the ball to the pedestal. He refused to accept the Ranger’s assurance that this was not the case, and later got stuck atop the ten story structure attempting to prove himself right. 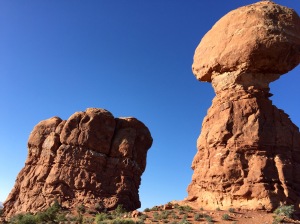 Probably my FAVORITE spot in the park was the conglomeration known as Sand Dune Arch. To reach it, you pass through a crevice between several stones, and enter into a space with high smooth red walls rising all around you. The ground beneath your feet is cool sand, eroded over time from the surrounding rock, and protected from the days heat by the towering monoliths. Some of the rocks glow like highly polished copper, and the feeling is more akin to being in a cathedral than a desert. 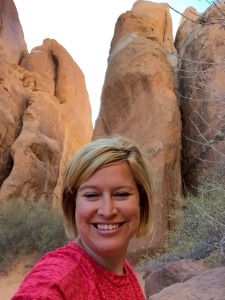 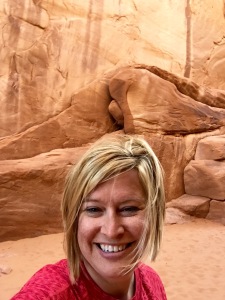 The loveliness of the moment was marred however, when, upon exiting, I bumped into Missouri Clinton again. Didn’t go down that dirt road after all I guess.  Attempting to be friendly, I commented that this was a particularly spectacular spot. Clinton responded: “Maybe you could walk with me and show me.” Flustered, I said I couldn’t as I had to get back to my dog waiting in the car. As I hustled back to Marigold, I could hear him cry after me: “I only wanted to see if you would hang out with meeeee…” Ugh. Way to make it awks Clinton. I then spent the rest of the morning furtively darting from spot to spot, hoping not to run into him again and cursing my distinct lack of stealth mode when traveling in a wildly colorful hippie van. I ended up leaving early.

But the good news is, that meant it was ANNIE TIME! Following an online tip, we headed about 30 miles north to Dead Horse Point State Park, where Annie could gambol about the trails to her heart’s content. And gambol she did! 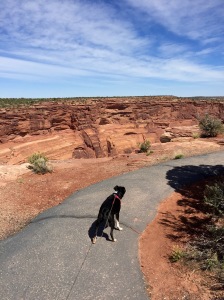 The park has a jaw dropping overlook into yet another gorge formed by the Colorado River (spoiler alert-there will be more ahead). 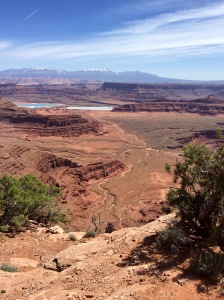 Now in full disclosure, I must say, that as much as Annie enjoyed this hike, and as amazeballs as the scenery was, I hadn’t prepared well. It was longer than I thought so I didn’t bring water, or chapstick, or a snack, and it was sunny so I was hot, and then it was WINDY so I was cold and I was never entirely sure where the trail was, and I was just cranky the whole time. Dudes, I am not joking about the wind, which you know I hate. This is not a reenactment. 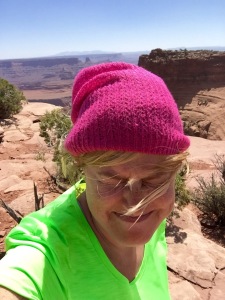 Oh, and did I mention if you Google Moab it basically means red dirt every-flipping-where all the flipping time? This was taken within five minutes of exiting Marigold.

Giddy upon the heels of our (separately) fun explorations, we decided to get REAL adventurous and bust out the pie iron Allyson gave us to make dinner.  First up:a grilled cheese sandwich. Unfortunately my GOOD cheese was a casualty of #FridgeGate (something oozed out and leaked under the wrapper giving it a nasty taste). So I had to use my individually wrapped cheddar slices I brought for snacking. 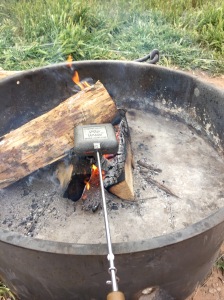 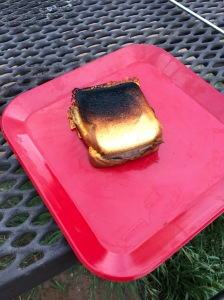 Looks like I’ll be supplementing with a hot dog then.