We rolled in to Bryce Canyon in the waning hours of the previous night, snagged an open campsite, and I attempted to relax by the fire while Annie attempted to BARKBARK enough to get us kicked out. It was a slightly less frigid, but still pretty chilly evening and we awoke to cold and wind. I hadn’t yet ascertained where the showers were, so decided to get right to the gawking at natural wonders. Bryce Canyon is known for its hoodoos-fanciful spires carved out of the red sandstone canyon to resemble animals, faces, castles, and whatever else your imagination can dream up. Hoodoo is a Paiute Indian word meaning “People and animals turned to stone,” and they refused to even approach the canyons believing they too would suffer the same fate upon entering.

We reached the first overlook just as a giant busload of foreign tourists was disgorging which was NOT ideal to say the least. The wind was pretty fierce as well, so it wasn’t like you wanted to linger waiting for them to jog on. But wait we did, and in waiting ambled down the path a bit, and enjoyed some glorious views in the solitude. Next I decided to take the advice of my invaluable National Geographic Guide to the National Parks and head to the end of the loop drive and work our way back through the stops. So off we went to Rainbow Point.

Oh, did I mention it’s another freaking high elevation  area AND there’s still SNOW everywhere?! Where the hell is my spring?! I am so sick of my winter coat and hats!! 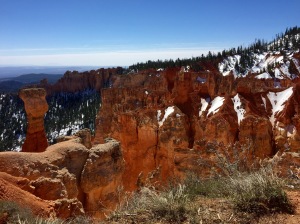 No one as happy about the arctic temps…

Mostly the morning was spent driving around looking at cool rock formations. 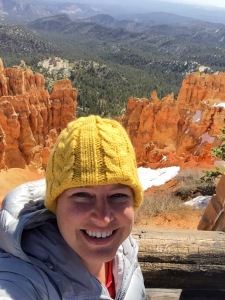 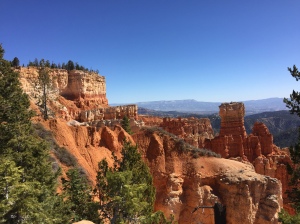 This one is called Natural Bridge, and I was already pointing out that it’s actually an arch before I discovered the sign correcting the misnomer. #learning

Then some of us snoozed in the car while others finally took a shower. (Which only took payment in gold coins!)

Then we went and had lunch on the porch of the General Store which I was told had WiFi but all it had was lies!!! (And yet more friends for Annie.) And some woman from Montgomery County who told me her whole life story, then remarked on how she used to have a black and white dog like Annie, then started speculating about how lovely it would be if we all woke up one morning as a blend of black and white?!?! Look lady, I’m just trying to write some postcards here, can you move it along??

Annie and I had a nice afternoon hike along the rim of the canyon, then I spent about two and a half hours moving from the Lodge (which had TERRIBLE WiFi) to the Visitor’s Center, (which had decent WiFi but no good place to sit and use it, and also closed at 6pm), BACK to the lodge all in an attempt to get a much delayed blog post out. Readers of that post will already be familiar with my irritation towards small children and rug cleaning devices.

Upon a “tip” from the desk clerk at the Lodge, we went to the poorly named Sunrise Point in an attempt to see the sunset. It was kind of a nonevent as far as I could tell. But I did see this cool tree, which was originally growing several feet back from the rim, but as time has eroded away it’s surrounding dirt, it is barely hanging on by it’s toenails. (Yes, trees have toenails.) It is FOR SURE the Bad Ass Tree of the Day! BATOTD

And with that it was time to bed down in Marigold and drift off to dream once again.

OH! Almost forgot-a couple of follow ups to yesterday’s post about Antelope Canyon. 1.) There were baby Great Horned owls nesting in a nook there! So adorable, but in a spot impossible to photograph. 2.) This Britney Spears video was partially filmed there.. https://youtu.be/IlV7RhT6zHs

Also: as some of you appear to think all I eat is Spaghettios and pizza, let the record show that on this date I ate a bowl of Cheerios, a Kind nut and granola bar, some hummus and crackers, some tunafish on crackers, a blueberry yogurt, and a can of kidney beans. Yes, I write down what I eat everyday.

Woke up cold and in a foul mood. Had bad dreams that lingered and left me homesick, grumpy, and over the Grand Canyon. We had stayed an extra night and it was time to move on. Maybe the drive would clear my head. It sure seemed to clear out Annie’s. We passed red sandstone mesas and flat scrubby deserts and… what’s this?? BOAT STORAGE?? Where the heck have we gotten to now?? 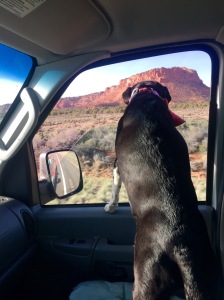 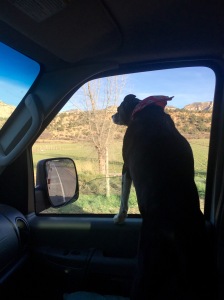 We were in Page, Arizona, very near Lake Powell I came to learn, and the site of an amazing looking place I’d stumbled upon on one of those “25 Places You Have to Visit Before You Die” lists that are always circulating on FaceBook: Antelope Canyon. Antelope Canyon (so named because hundreds of years ago antelope actually used to roam these parts) is what is known as a slot canyon- a canyon formed by the pressure of water rushing through rock which causes it to become very narrow and deep. Like a slot! This canyon is located on Navajo land, and so can only be visited on a guided tour.

Traveling with Annie brings many rewards, but it also brings many complications. Balancing her needs/safety/comfort against mine can sometimes be a challenge. For instance, when I’m driving all day, she’s resting. So when I’m done driving and want to rest, I often need to exercise her instead. Also, there are a lot of places I want to go that she can’t, and I have to decide if the issues caused by leaving her alone are worth what I will potentially get out of the activity. Most of the National Parks we’ve visited have had fun looking hikes I would have enjoyed, but knowing how much Annie also enjoys hikes, it doesn’t seem fair to go on one without her. Leaving her briefly for shopping or restaurants is easier to justify. I digress, because Annie wasn’t going to be allowed to come into the canyon with me. And the weather was just a touch warmer than I like it to be to leave her in the van. The canyon guide offered me some local kennel options, but honestly, she would be so distraught if I plonked her down in a strange cage and left her somewhere totally foreign that the emotional damage would likely outweigh any discomfort she might encounter in a warm van, with windows halfway down and a huge water bowl. This canyon was a once in a lifetime thing, so I found the biggest, shadiest tree I could and bit the bullet.

And it was mind blowing! Seriously-you NEED to visit this place! It doesn’t look like much from the outside…

But inside…. whoooaaahhhh. It’s a twisty, turny, crazy maze with light shining through at funky angles and illuminating all the striations and colors on the walls. 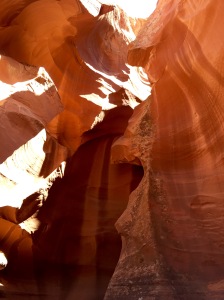 And then we had this brilliant Navajo guide who knew all the best camera angles and settings to get the coolest shots. In this one, if you focus on the brightest light patches at the center, it resembles a twisting candlestick with a flame shooting off to the right at the top of it. 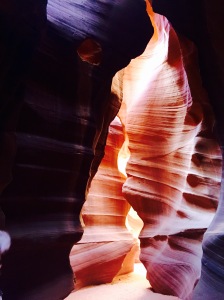 In this one, the shadow outlines the form of an illuminated bear.

Here we have a heart. Seriously, it started to get to the point where I was like “could we just focus on how cool the canyon is and enough with making sure all 14 of us get a wacky shot around every corner?” 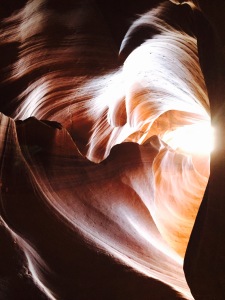 My attempt at a personal photo alongside of his. I look even more stoned in his.

This one did kinda blow my mind though. It looks like I’m holding a lit torch!

It was so magical in there and so unlike anywhere I’ve ever been and just stunning. There were also spots with fabulous acoustics that could make your voice do crazy things and markings where whirlpools had formed and odd tree limbs stuck in crevices that he could date to the month and year, but none of those make good photos.

And, spoiler alert, Annie was just fine and none the worse for wear after two hours on her own.

Just around the corner from Antelope Canyon is another amazing spot that the interwebs alerted me to – Horseshoe Bend. It’s basically just a bend in the, say it with me now, Colorado River (previously spotted by my campsite in Moab and forming the Grand Canyon), but it’s carved out this huge lump in the middle that is just stunning to look at. Of course, first there’s a mile long walk in the hot sun to reach it (Was I really freezing under layers of blankets just this morning?)

Phenomenally breathtaking. The water is an insane greenish blue, it’s just beyond. You also have to get super close to the really uneven rocky ledge to get anything close to a proper photograph, so it’s a bit unnerving. If the weather had been cooler and I had been less tired from the day it would have been a perfect spot for a picnic. 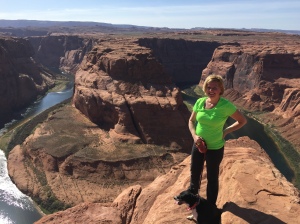 Did I mention that the mile walk in the hot sun to get there was DOWNhill? Which means UPhill alllll the way back. Ugh.

On the road again, and here’s a familiar sign… where could we possibly be headed next?