Let me just start by saying that I LOVED Orcas Island. Probably as much as I loved Anacortes, but not in the sense that I could ever actually live there. For whatever reason my “livability analysis” often hinges on the proximity of a movie theater. It’s not even like I go to movies all that often, but somehow movie theaters have become proxies for “entertainment and leisure activities.” If there’s no movie theatre anywhere remotely close, then there is likely a dearth of other things to do as well. You can take the girl out of the suburbs, but. . .

Anyhow- it was a fairly sunny day and Moran State Park, where we were camped, also encompasses Mount Constitution, the highest point in the San Juans. Now one could hike or bike a VERY steep two mile incline, but Annie and I decided Marigold should get a peek at the top as well. OK fine, I still can’t walk up hills! Nevertheless, the view was AH.MAY.ZING! Islands floating adrift in the blue blue Salish Sea. Pictures can’t do it justice! I literally gasped at some of the views. 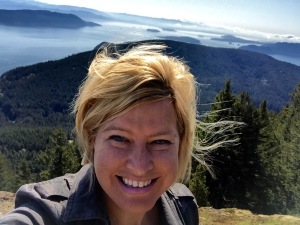 We even met a nice (older, married) local gent who HAD biked up and offered to take our photo. AND he gave us an excellent tip on a sunset spot for later. And that photo on the left? Those white mountains peeking up in the distance? That’s CANADA! (Cue “I can see Canada from my house” jokes. Not all that funny actually.) Hi Canada – sorry we couldn’t make it up there this time. Maybe I need to plan for Campervannie Two: Canadian Boogaloo! 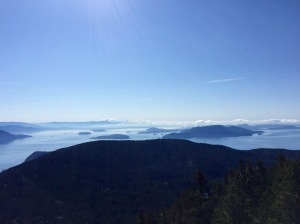 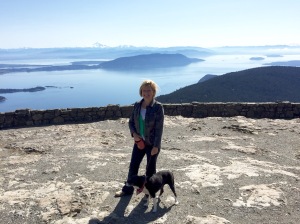 I may have mentioned yesterday that the island is chock a block full of artists and artisans, with probably the most iconic being the Crow Valley Pottery – a studio opened in 1959 in an old log cabin that has been producing locally-made pottery ever since. I was lucky enough to find a shop selling some vintage pieces from the seventies and bought myself a cute cereal bowl. After wasting close to two hours to get a mediocre sandwich from an understaffed cafe who also seemed to find me and the other woman dining alone invisible, I spent a fair amount of time browsing the shops and admiring the art. For anyone who has ever been to Ocracoke Island in the Outer Banks of North Carolina, this place reminded me a little bit of it. Mandatory ferry ride and all.

OK. So. Remember that picture I showed you yesterday of Indian Island off the coast of Eastsound? Well check it out today! There is a muddy gravel bar stretching out allowing entry!! We happened to stumble upon one of the magical 40 days when the island is accessible by foot! Huzzah!

So access it by foot (and paw) we did! Really cool! As we made it to the other side, there was a young blonde woman sitting on a rock eating something out of a paper bag. Annie was all up in her face, and strongly resisting my attempts to pull her away. I was a bit surprised at her enthusiasm until the woman said: “Oh this is just chocolate, you wouldn’t like this.” Err… Annie begs to differ. Butler women LOVE chocolate. It may even surpass a dead mouse. 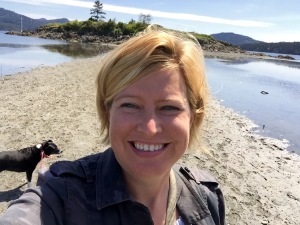 The island was a small mound with a path leading through hundreds of tiny wildflowers and nice views to the town we had just left. It was a beautiful day and the sun made the sea positively glitter. 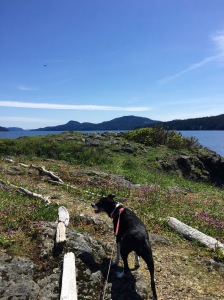 Alas, when we were almost to the top of the mound, there was an “Island Guardian” there who said dogs weren’t allowed up at the peak as there were several Oystercatcher (a type of shore bird) nests that needed protecting. Now THIS was a restriction that I could understand! (Also I love oystercatchers, they have these awesome vivid orange beaks that contrast with their black and white plumage.) So we went down and wandered the rocks at the base of the island and I even found a wee little crab! 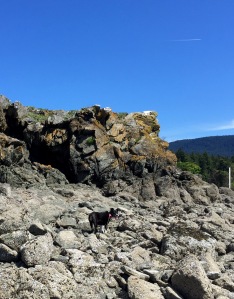 Feeling some heretofore unknown burst of energy (and not yet realizing it would be fleeting), I decided to take Annie on a four-mile hike around one of the lakes near our campground – Mountain Lake. It was beautiful, we had the trail to ourselves, the surrounding pines made the air impossibly fresh . . . and 2/3 of the way through I was DONE! Stick a fork in me and slap on a toe tag. That last mile was a slog, and as we were walking in a circle, there was no way to guage how far we had come or how far we had left to go, so for all I knew we could have had three miles left. When I came around a curve to what I thought would be the parking lot and it wasn’t, I nearly wept. But hindsight is a marvelous thing, and from the distance of a week the memory is entirely fond.

Can you tell my enthusiasm is mostly feigned at this point?

After the march . . . errr . . . walk, we took a much needed nap in Marigold, and then headed out to what I was told was the beach all the locals visited to see the sunset. Turns out there were only two other people there. And they were from Oregon! It was heaven – I brought the last of my food from Gere-A-Deli and we had a picnic on the sand while watching small boats sail by, loons dive for fish, and the sun gently sink into the sea.

You can’t see it, but there’s a snow capped mountain peak looming through the pink haze behind me. It is going to be REALLY hard to leave this place.