I don’t know if I’ve mentioned, but there are actually two cabins on the property I’m staying at-both owned by the same person. My info packet came with all sorts of dire warnings as to what would happen if my dog got on the furniture (I put down blankets) or barked excessively (uh oh). I had been trying my best to keep Annie in check, but there’s only so much one can do when confronted with an aggrieved terrier. The family next door is achingly Midwest wholesome (four kids, two of each, all blond, Mom looks perfectly put together at all times, even when jogging), but with 4 kids in a small cabin on the water that carries sound, again-only so much could be done. This morning I encountered the Mom while I was out walking Annie. She seemed a bit reticent, and I was afraid she was going to complain about the barking (and who knows what went on when Annie was alone for a few hours while I was on the boat cruise Monday). But nope, SHE was worried I was going to complain about HER kids! And claimed she hadn’t heard a peep out of the dog! So I quickly realized we each had as much to lose as the other and we had reached a satisfactory detente.

Anyhoodle. Feeling a bit worn out from all the walking yesterday, Annie and I decided to drive over to the Western “quiet” side of the island to see what that was like. Answer: Very nice!

Driving through the small town of Somes (the first village established on the island after the French/Indian wars, I saw a large banner proclaiming PIES! and a smaller sign that said “Pie Sale, Noon-Gone” Alas, it was only 11:15.

Acting on a tip from Thom that I feared might be out of date, we attempted to find a shop that allegedly sold popovers from 7:30-11:30 every morning all for the benefit of the local soup kitchen. And we did! Only we pulled in at 11:28. Booo! BUT the nice lady said we could take our popovers and fixins to go! Yay!

We decided to take our impromptu picnic out to the Bass Harbor Lighthouse-the only one on the island (and it is still in use!)

By following a short trail to the other side we found a comfortable spot to perch on some rocks, glimpse the light through the trees, watch the boats and the tide, and enjoy our snack.

Unfortunately, eating at the same level as Annie means she decides who gets what size portion.

Still hungry, we opted to drive a little further to the small town of Bernard to try what was alleged to be the freshest and tastiest lobster on the island-at Thurston’s Lobster Pound. The little shack sits right out on the harbor and you can pick your own, still living, lobster from a vat and send him to his ultimate doom. Fun! 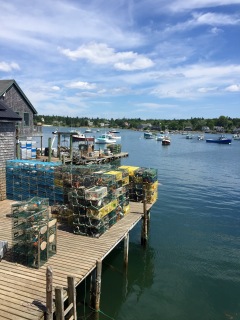 Even more of a treat, they offer softshell lobsters which can only be had on the Maine Coast and which are much sweeter than the regular hardshells.

Driving back, we passed the coolest thing-apparently in Maine you can just set up a little cookie and pie stand filled with delectable goodies and a tin box in which to insert your payment. All on the honor system! Have I died and gone to heaven?!

On  the down side, by the time we got back to the big pie sale around 2:30 they were all sold out. But not to fear, dessert is a pretty big deal here (such that the island-Mt. Desert-is actually pronounced Mt. Dessert!), so we found another random spot where a woman was apparently selling pies out of her house and snagged ourselves a prime blueberry. 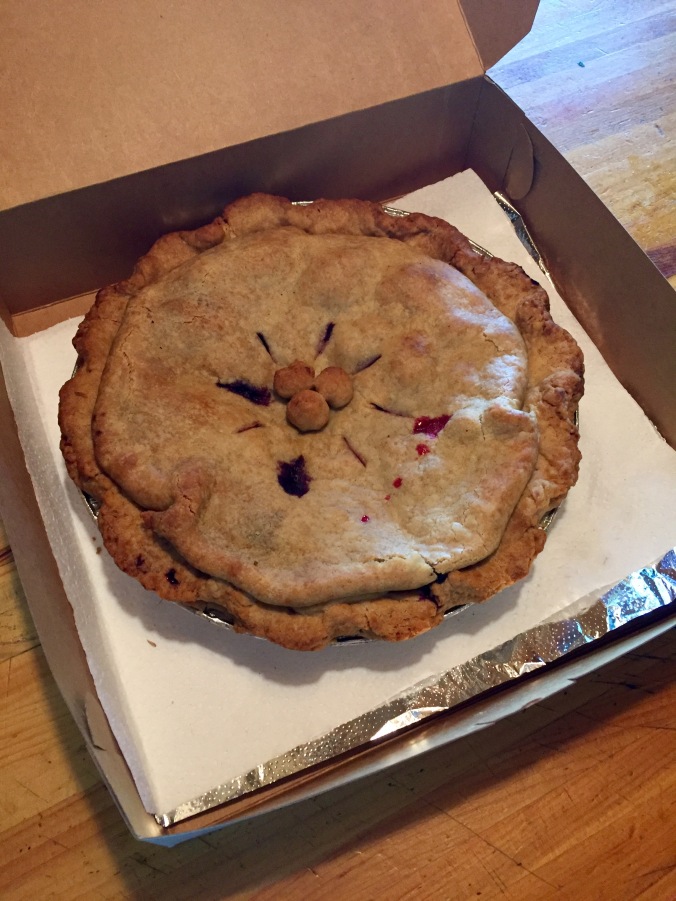 Which we enjoyed at our now traditional sunset watching spot at Hadley Point. I especially enjoyed watching the golden retriever, Summer, whose parents were working diligently to get her to pose in front of the sunset so they could take a picture with their very nice camera. After about 5 minutes of that, I saw a blur go down the beach to my left, accompanied by cries of “SUMMER, Noooooooooo” and then a loud splash. After wallowing for a bit she came out and rolled on the ground until she had a full coating of pebbles and sand. Sometimes it’s not so bad to have a dog who hates the water.