Annie and I spent Monday night as one of only two vehicles in the entire Stonewall Lake Resort (West Virginia) campground. The other guests were an older couple who were working nearby and settled in for a long term stay in their full size RV. Consequently, I had to be the only person making use of the camp shower and restroom. And yet  the maintenance lady could not be deterred from cleaning it during the ten minutes I was spending trying to dress post-shower while simultaneously wrangling Annie (She was fine as long as I was within two feet-but if I wandered over to the sinks-still within plain sight-she BARKBARKED. Hence, I was left with no choice but to brush my teeth in the recently vacated shower stall.)

A quick reorganization of the van and we were on our way. First stop, perhaps the coolest restaurant I’ve ever been to, and that’s counting the one with champagne in the bathroom, Hillbilly Hotdogs. The ‘Billy is decorated chock-a-block with every piece of rusted out junk and debris you can think of. The junk itself has then been thoroughly graffitied with names, romances, and other silliness to add to the ambiance. The whole effect was so overwhelming that it was hard to find the actual restaurant hidden amongst the “wedding chapel,” “outhouse,” “moonshine still,” and Marigold’s distant hillbilly cousin. 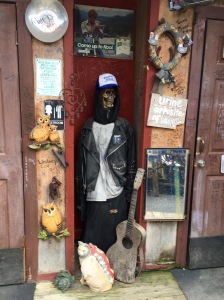 Real hillbillies don’t let silly nonsense like health codes stop them from allowing adorable canines to dine inside along the rest of guests, so Annie was warmly welcomed and joined me at a table inside the renovated (and graffiti adorned) school bus to jam to some old skool country tunage while we awaited our orders: a deep fried hillbilly dog with homemade chili sauce, mustard, and onions for me, and a plain corn dog for her.

The food and hospitality were so wonderful, we could have stayed all day, but we had yet miles to go before we slept. Not long after we crossed the border into Kentucky, I saw a sign and decided to make a spontaneous detour to the Kentucky Folk Art Center. The place was awesome and had a small but well put together gallery of outsider art – almost all from native Kentuckians, including a homeless dude who sketches street scenes inspired by advertising signage in magic marker, noting the time he began and ended work on each piece, and a prisoner who taught himself how to make paper mache out of materials he had on hand. 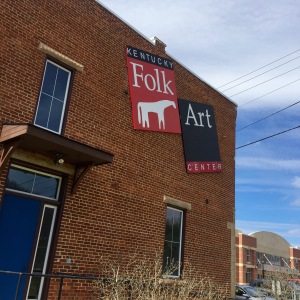 On our way out of town, I stopped to fill up my tank, only to encounter the world’s cheeriest twenty-five-year-old gas attendant, who insisted his station was at the forefront  of bringing full-service back, and informed me he gets his weather reports the old-fashioned way . . . by listening to NPR.

At last we reached our destination and  Annie and I settled in for a surprisingly chilly night at Mammoth Cave National Park.