Warning: This one gets a little tour guidey.

My mood improved considerably yesterday. I won’t pretend a shelter that permitted me the luxury of walking around indoors, a shower, and alcohol had nothing to do with it. The potential for rain loomed heavily over the forecast, and most of my plans were in non dog-friendly locales, so my trusted companion spent the bulk of the day cuddled up on the futon in Mini Music City while I braved the mean streets of Mega Music City alone.

First stop: fuel and fortifications at Nashville’s legendary Pancake Pantry. When I arrived there were roughly 15 people waiting ahead of me, and by the time I left the line stretched around the block. But one taste of their signature sweet potato pancakes with creamy cinnamon sauce and I would have gladly camped out all night. (This pic doesn’t accurately portray the line, but the ones that do don’t want to load. Use your imagination.) 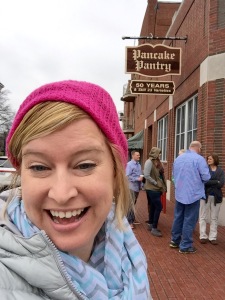 Next stop: the fabled Ryman Auditorium! Originally built as a church for a revivalist preacher, the acoustics that were designed to carry his words to the masses now rank in the top three in the country for musicians and performers. This space is where bluegrass was literally invented one night in December 1945. It’s where Johnny Cash first saw June Carter as a schoolboy on a field trip, and where he first advised her of his intention to marry her (while they were both already wed to other people). It’s where Elvis played once, received a lukewarm reception to his “reimagining” of a bluegrass classic and vowed to never set foot on the stage again (he didn’t). And it was the home of the Grand Ol’ Opry for over 30 years. 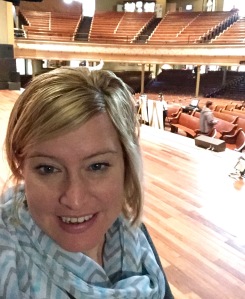 Fun fact: the Ryman never had dressing rooms, and the backstage area was cramped and lacking in climate control. But the stage door opened out into a back alley onto which Tootsie’s Orchid Lounge also had a door, and it was here that many of the performers found a way to “keep entertained” between the early and late shows. Some of them, like Hank Williams, never returned for their second set.  Tootsie’s is still pretty badass. On any given day you can enter to the strains of the decidedly non-country star named Alex Upegi (who looks better suited for a Pittsburgh sports bar than a Nashville jam session) leading a “Drunk on a Plane” sing-a-long, and next up be treated to a set by Jimmy Snyder-an old timer who’s performed with Merle Haggard, Willie Nelson, and Elvis.

After drinking my lunch (Diet Coke and proper Tennessee whiskey) I ambled about the lower Broadway area taking in the sights, sounds, and, of course, souvenirs. Confidential to Karen and Toni: when you ask the sales girl if she sells commemorative underwear, she IS going to look at you funny, even if she’s a dead ringer for Jemma from Girls.

With foolish hopes of finally realizing a two decade dream of seeing a set at The Bluebird Café, I made plans to get to the club a full two hours before show time (and an hour earlier than my prior attempt). The line was even longer. On to Plan B: I thought I would check out the huge year-round, all day Farmer’s Market I had heard so much about. Apparently year round loosely translates to “in late March you get just about bupkis.” Plan C: some cool old school “fried pies” food truck I had heard tell of. Which now appears to be a sketchy barbecue joint. Tired, still slightly tipsy, thwarted at every turn . . . well, I’m not proud of what came next, but sometimes a girl’s gotta do what a girl’s gotta do. I went to Chipotle.

Daily randomness: The night before, at the froo-froo restaurant, the cocktail I ordered was named “Moose”. I found it odd at the time, as Moose seems more Canadian than Nashvillian, but I shrugged it off. While driving through town yesterday morning, I saw a sign painted on the side of a building advertising Moose brand something or other (I wasn’t fully paying attention at this point). Later that afternoon, while shopping in the Opry store, a woman strolled through wearing a baseball cap with a three dimensional moose head protruding from it. Fully perplexed at this point, I asked the sales clerk if she could explain the Moose/Nashville connection. She was as dumbfounded as I. I swore if I encountered a fourth moose it would officially be a sign from the universe. Still later, at the Farmer’s Market…