Another New Mexico sunrise, another leisurely soak in my clawfoot tub. (Another morning spent evacuating approximately seven gallons of mucus from my head, before you get too jelly.) Acting on a tip from our Air B&B hostess, Annie and I went in search of a scenic hiking trail. Our progress was delayed somewhat, as it appeared one of the locals was moving house…literally… 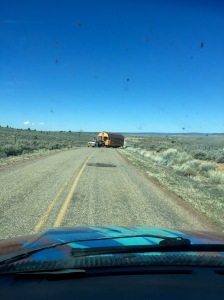 But once we arrived at our destination, boy did we hit the jackpot! It started out as standard issue New Mexican loveliness… 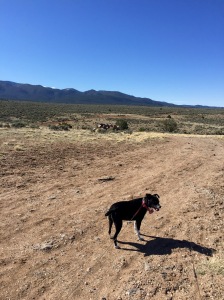 . . . but turn a corner, and the next thing you know you’re being treated to jaw dropping views of the Rio Grande Gorge!!

Yes, that’s a rushing river hundreds of feet down there, and yes, it’s the same one I nearly plunged to my death in the other day. Hikers can walk right to the edge of the precipice, even wander out on a rock overlooking it with a recalcitrant dog on a string, and take their chances at stumbling to a watery grave.

And all this beauty is not contained in some official park or designated recreational area, it’s just a random trail at the end of a random road that I never would have discovered on my own. Hiking along, not a care in the world, basking in the sunlight, and feeling like we could be miles from any signs of civilization Annie and I were thoroughly enjoying the morning.

And then! What’s this?!?! DANGER DANGER!! Trouble detected ahead!! Three strange men approaching, locate the panic alarm and start plotting an escape route!! 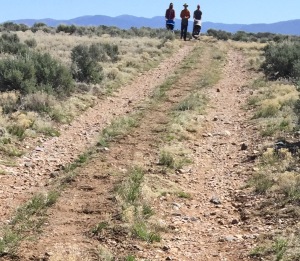 But wait… zoom in a little closer on that picture. Oh. I see. That massive stranger danger out here in the wilderness is just three regular dudes . . . two of them pushing baby carriages. That’s ABOUT as non-threatening as three strange dudes are gonna be. And apparently we’re not lost in the Amazon JUST yet.

A little further along we had another close encounter of the “looks downright terrifying at first but is actually quite harmless” kind. Annie apparently prefers her critters either furred or feathered as she didn’t even bat an eyelash at Stanley here. Props to any of my naturalist friends who can give a positive ID on that bad boy. 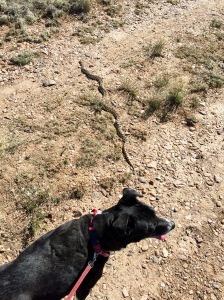 Our next stop was one of the most famous buildings in Taos, as well as one of the most photographed and painted churches in the world. Built in the late 1700’s as a refuge against Comanche attacks, the San Francisco de Asis Mission Church has been artistically recreated by legends like Georgia O’Keefe and Ansel Adams… but I bet neither of them ever thought to do a selfie! 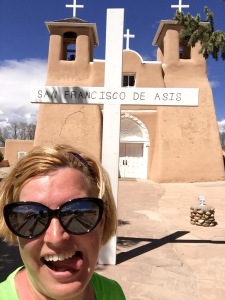 Taos is a weirdly wonderful place. Where the unexpected can happen at any moment.

Where you can glance in to a coffee shop at 2:30 in the afternoon on a Monday and see two men waltzing together.

Where you can make sparkly denim happen. 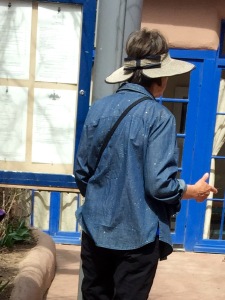 Where you can look down on your hike and find a mustachioed poo bag (unused). 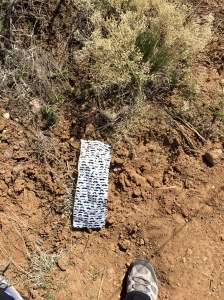 Or where the following can occur:

Late in the day I decided to stop for a cocktail (oh, and lunch) at Doc Martin’s Restaurant at Historic Taos Inn. As far as I can tell this Doc Martin is unrelated to either the clunky boot maker, or Donna Martin’s dad. But he WAS one of the founding figures of Taos, and after his death his wife turned their home into an inn.

The eagle-eyed may have spotted my fancy new turkwaz earrings. They may have been a smidge out of budget, but within five minutes of purchasing and donning them I was flirted with by a gentlemen. Now Mamood has a good 20 years on me and not his ENTIRE allotment of teeth, but he was quite nattily dressed and a business owner, and he LOVED my Zuni earrings. SO much so that he had to keep touching them. And then my face. But he did seem quite enamored with me in my current boxcar/van livin’ state of style, so there’s that.

I was admiring the two dogs seated with a couple at the table next to me when something caught my eye. “Excuse me, (I say) is your dog’s collar the Maryland flag?” “Why yes it is!” “How cool, I’m from Virginia!” … and it continues until I discover that the woman (Pat) is from Hamilton Virginia which is literally two towns over from my town, and she teaches pottery classes like a mile from my house! In fricking Taos! They were kind enough to invite Annie and I to join them (and Lucy and T-Bone) for drinks and swapping stories. In the course of conversation I mention my current lack of employment status, my past experience in writing, editing, and marketing, and my desire to pursue same going forward. And then it turns out that Greg (the dude) has a brother-in-law who does freelance work in the same field, in a town nearby to mine, and occasionally places other folks in such positions. So I scored a name and an e-mail address for a possible job contact when I return! Result! They were lovely, fun people (with lovely, sweet rescue dogs), and I just had the best time chatting with them. East Coast represent! 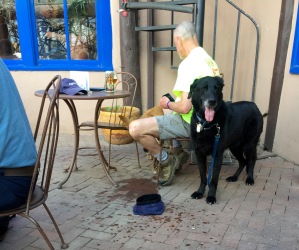 Terrible stealth shot of Greg and T-Bone when I just wanted a cute dog pic and hadn’t met them yet.

3 thoughts on “Day Sixteen: Who Needs You I Got (New) Mexico : New Mexico (Taos)”