It was cold. Mega cold. So cold that I woke up in the middle of the night to find Annie shivering and covered her in fleeces. So cold that when I woke up a second time she was curled around my head for warmth, so I brought her into the sleeping bag. Cold. But the wind had died down by the time the sun came up and the campground was deserted and it was stunningly gorgeous-the kind of morning that makes you feel glad to be alive. So glad that I boiled some water for some oatmeal and busted out my fancy toast maker (burning my finger in the process). Annie and I explored the area a bit more, climbed on some rocks, and, if you’re not sick of gorge pictures yet, discovered the spot where the Red River and Rio Grande converge. 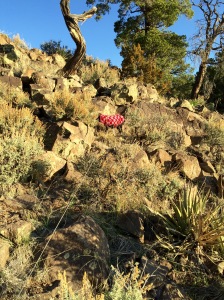 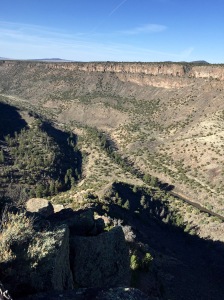 And then once again it was time to saddle up Marigold and hit the trail. It’s funny how living on the road makes you lose all sense of time or date. I was vaguely aware that it was Easter weekend from being on social media, but, and not being an overly religious person myself, was still shocked to see a parade of twenty or so people walking along the side of the highway in the middle of nowhere New Mexican Plains, their leader carrying a cross with Jesus nailed upon it. They were headed to a tiny church I had just passed (and sensibly wearing hi-visibility jackets, which, while taking away from the striking visual nature of their message, was still a solid idea, even if there was only one other car on the road). Other than that, the high plains were fairly flat and empty, the occasional ranch sign or smattering of cows the only thing to break the monotony. But all that was about to change as we crossed the border into . . . 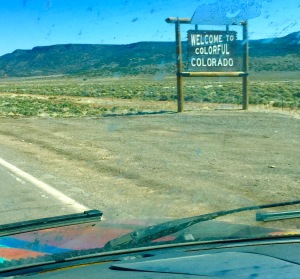 Yes, my windshield is in desperate need of cleaning, no it’s not that colorful (yet) even with a little photo enhancement. The first thing I noticed about Colorado is that it almost immediately gets a lot more Western feeling architecturally than New Mexico. Bye bye adobe and hello wooden storefronts and saloons. The second thing I noticed was that . . . they care about ditches?? 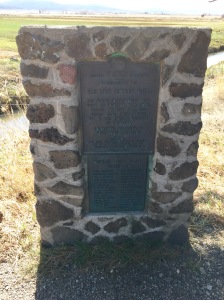 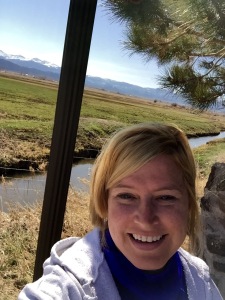 This is the San Luis People’s Ditch-the Oldest Continuously Used Ditch in Colorado! Dug by hand by pioneer settlers! Further down on the plaque it notes “Colorado’s Greatness is Built Upon Irrigation.” Yay irrigation! And to think this wasn’t even on my original itinerary!

Fresh off that excitement, we soon rolled in to Colorado’s Oldest Town! I know this because it’s spelled out in rocks on the side of a hill . . . 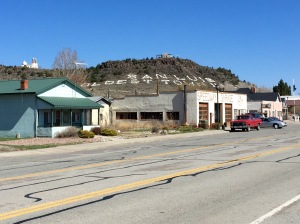 Further on we passed what was not labeled as such, but may well be, Colorado’s oldest Safeway grocery store, as they apparently offer parking for Model T’s. 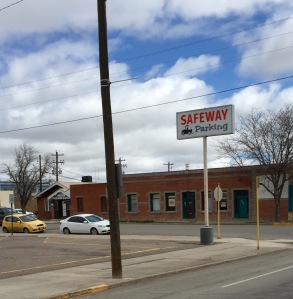 Outside of Walsenburg Colorado, we passed a clever marketing strategy for a local artist (Yes, I’ve “liked” him.) 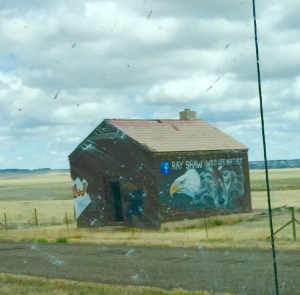 But the main excitement for today was going to be meeting up with another familiar face- Carol Roberts! Carol was one of my Mom’s dearest friends, who has since retired to Colorado to be closer to her family. She’s taken many solo adventures of her own, including 3 weeks following the Lewis and Clark Trail, and has been an invaluable source of inspiration and advice for my own journey. And yesterday she drove about two hours to meet us and provide just the balm these weary travelers needed (and I don’t even mean the homemade chicken soup she brought us!) 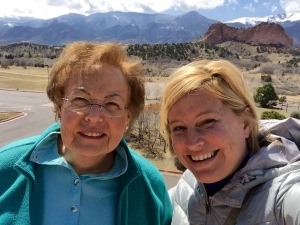 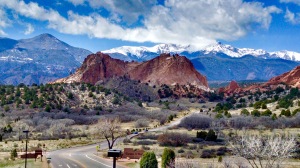 We met in Colorado Springs at Garden of the Gods, a really cool park with amazing red rock formations popping up out of the ground, and the stunning snow capped Rocky Mountains in the distance. The area was an important spot for many Native American tribes for centuries, but was “discovered’ by two surveyors in 1859. The first, M.S. Beach, suggested it would be “a capital place for a beer garden,” but his friend, Rufus Cable, replied “Beer Garden! Why it is a fit place for the gods to assemble, we will call it Garden of the Gods!” Interestingly, no alcohol of any kind is now permitted in the park. 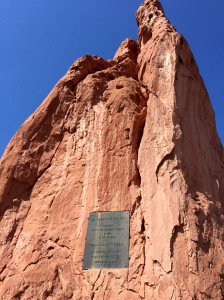 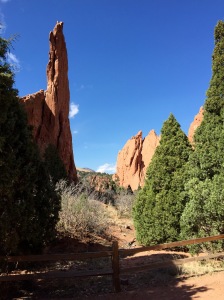 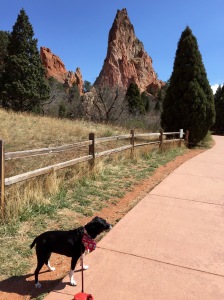 This formation is called “Kissing Camels” 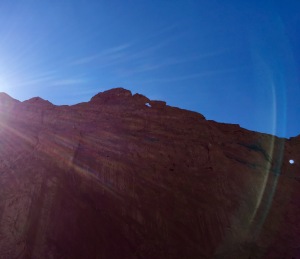 See the ripple pattern in the rock? Those ripples indicate the rock once lay at the bottom of a streambed, but it has now been pushed into a vertical position. 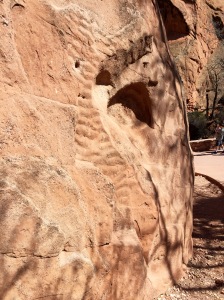 Signature rock has hundreds of dates and initials carved into it, some of which have been dated back to the 1800s. 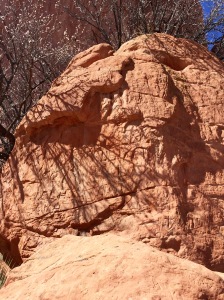 Balance Rock is the most popular spot for pictures. Back before this area was a public park, one enterprising gentleman, Paul Goerke, purchased the land surrounding just this rock and charged tourists 25 cents a pop for photo ops. He even kept handy a pack of burros which folks could pose upon. As time went on and technology advanced, people started toting their own cameras around and didn’t need his services any longer. This didn’t stop old Paul though, he simply constructed a wooden fence and charged the twenty five cents for admission, and even set up a lunch counter nearby for additional revenue. The locals literally cheered in the streets when his land was eventually acquired by the park. 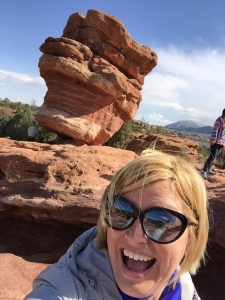 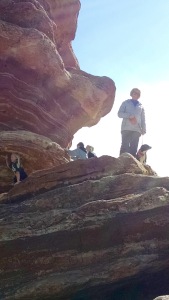 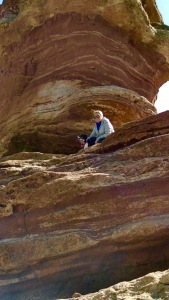 Annie always has to take intrepid explorations to the next level. 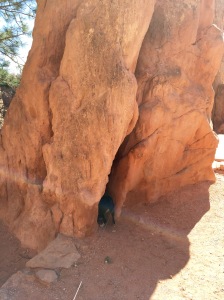 After a chilly hike through the park, Carol was kind enough to indulge me in a visit to another intriguing site nearby, the Manitou Cliff Dwellings. This location has been a tourist attraction since 1907, and purports to be preserved cliff homes of the ancient Anasazi Indians (like 1200 BC ancient), the forerunners of the Pueblo people I encountered in Taos and Santa Fe. But everything just looked a little too “perfect.” And there were homes representing several different time periods all lined up in a neat little row right next to each other. 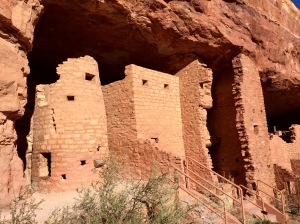 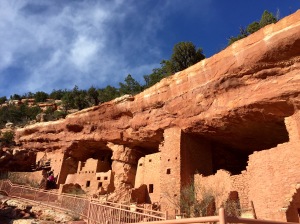 Some Googling after the fact seems to reveal that these WERE at one point actual Anasazi homes, but they were discovered several hundred miles Southwest of here, in the Four Corners area, and were later shipped by railroad to Colorado Springs and reassembled as an attraction. It’s still pretty cool, and fascinating to see the tiny rooms they lived in built underneath a cliff ledge. Doors and windows were kept small so that they could easily have stones rolled in front of them to protect from attackers. The age of the ruins can be accurately dated by comparing rings in the wooden posts used for drying animal meat alongside the rings in nearby trees. Known years with certain stressors such as flood or drought will be recognizable in the rings, and the earlier dates determined from there.

One of my favorite things about the site is that both people and pets alike are permitted to wander and explore anywhere, all throughout the ruins. 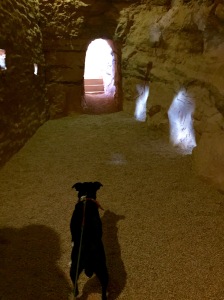 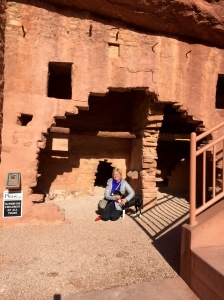 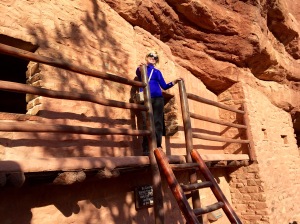 And not just through the ruins, but through the gift shop and museum! They had a nice refreshing bowl of water set out for pups, and . . . hold up a minute . . . umm . . . no Annie, I don’t think that bin of lucky rabbit’s feet was intended as an activity station for you! 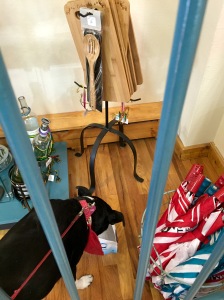 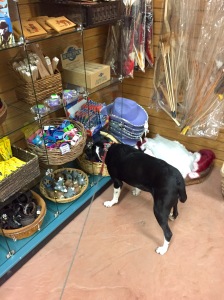 One thing I learned fairly quickly is that altitude sickness is no joke. I was winded even more easily than normal considering we were walking on primarily flat terrain, and both Annie and I needed frequent rehydration (which Carol never let us forget!) By the end of the day I was exhausted. Carol to the rescue yet again! She treated me to an excellent meal at a funky little place called Shuga’s and then put Annie and me up in a Residence Inn for one of our last scheduled indulgences in clean sheets and hot showers. It was such a fun day, and in a way almost felt like my mom was there, as Carol treated me like her own daughter and went along with all my silly ideas just like Mom would have. I barely had time to root through the goody bag she left me with before drifting off to dreamland. 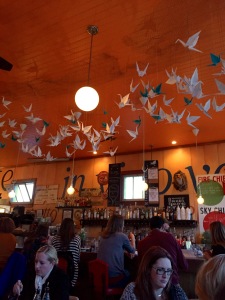