So this is weird. Due to lack of internet connection the last few days, I’m writing about Sunday on Wednesday. And I’m three days behind. And today is going to be a long driving day so it’s not like I’ve got time to kill, or even a decent connection now but here we go.

Waking up on Easter morning was a very “on your own, far away from home, there doesn’t seem to be a friend when you’re alone” kind of feeling (Yes, it’s a Partridge Family lyric, you wanna make something of it?) It may have been the first time on the trip I really felt lonely and wished I was somewhere else. As previously mentioned, I’m not particularly religious, but Easter has always meant family to me: baskets and brunches and just spending time together. So it was weird to be in a sterile hotel room with no plans to see anyone all day. But such is the life of an intrepid explorer. There were many miles to cover before nightfall, so after a holiday pig’s ear for Annie,  it was time to hop in Marigold and roll on out of Colorado. 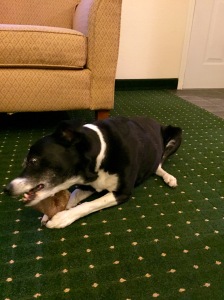 Much of the day was spent driving through the Rockies. The scenery was spectacular, although neither Marigold nor I much cared for the constant ups and downs of the highway. Also it was cold. And kind of gray. And even though I had the campervannie washed yesterday, the windshield was already bugging up again. I was in a mood. 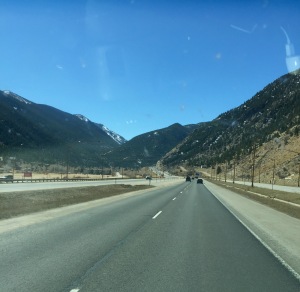 I will say, that other than the Rockies looming over everything, the suburbs of Denver could easily pass for the suburbs of Northern Virginia. Very similar architecture, housing styles, big box stores, etc. . . It was the most “at home” I had felt in weeks. Also of note, and I assume this has something to do with the altitude, when I refilled my gas tank halfway through the Rockies, it took the needle like fifteen minutes to make it’s way back to F.

The audio book I was listening to made reference to the Easter Parade in New York City (do they still do that?), and it reminded me of my other favorite Easter tradition, watching the Fred Astaire/Judy Garland movie of the same name. I’d randomly discovered it on TV at my grandparent’s as a kid, and have watched it every year since. I was sad again.  Looking for any sort of excitement, I noticed a sign for a wildlife overlook and pulled off the highway into a charming little mountain town called Georgetown. Parts of Georgetown looked as historic and arty as the one I know from back home, but it definitely lacked the traffic issues. 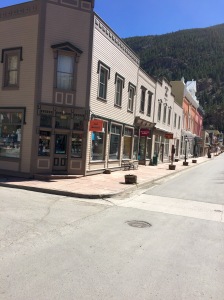 It also had a stunning waterfront. 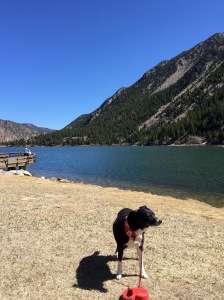 But unlike Georgetown DC, Georgetown CO isn’t known for its elephants and donkeys. No, this town is all about the sheep. Bighorn Sheep – Colorado’s state animal. And there was a viewing station set up with fancy binoculars trained on this one particular mountain side where the sheep were apparently paid to promenade about for the amusement of silly tourists. Only I guess because it was Easter Sunday, they were all off duty, so what I saw was bupkiss. And it was cold and windy, and there was only so long I was going to stand there like an idiot staring at an empty mountain. So here’s the mountain. Maybe those of you who excelled at interpreting the Colorado City street sign can play “Where’s Sheepdo?” with better success. 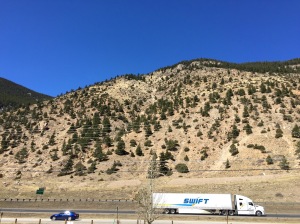 About fifty miles down the road, just outside of Vail, I finally saw three bighorn sheep all but standing on the highway. Alas, I was on the phone with my Dad and couldn’t get a photo. Just picture sheep with twirly antlers.

The scenery seemed to change almost constantly. One minute it’s towering snowcapped peaks, the next you’re driving THROUGH a mountain, then it’s yellow Texas-style limestone only with tall skinny pines, and then rolling red rock sandstone. 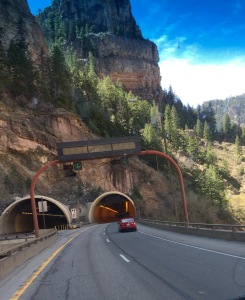 And FINALLY, you’re leaving colorful Colorado and heading on into Utah. 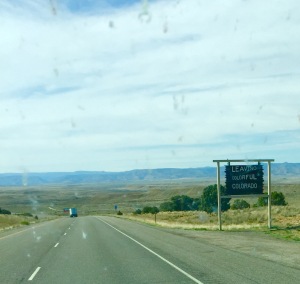 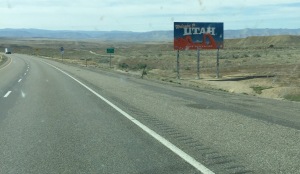 Utah seems flatter, a little greener (at first) and with rolling plains leading to the La Salle mountains in the SouthWest. It seems deserted on the highway? Perhaps because it’s Easter Sunday and this is a more religious state? Or because there’s nothing here? Rock formations start to crop up, some look like wrinkled elephants flomped down upon the earth.

And FINALLY, FINALLY. . .  we came to a stop in Moab, Utah. During my down time in Colorado Springs, I had researched camping in Arches National Park and Dead Horse Point State Park – the two places we planned to spend the bulk of our time. And both were bursting at the seams full. I wasn’t super worried as I had read that there were an abundance of other BLM (Bureau of Land Management) areas with camping spots in the surrounding area. And this time my poor planning skills paid off. Instead of a dry, dusty desert campsite like we would have had in either of the parks, we pulled right in to a GORGEOUS spot right on the Colorado River with cool red rock formations towering all around us! 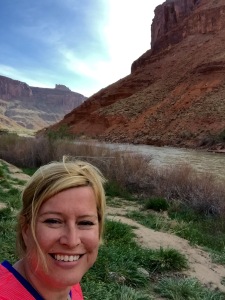 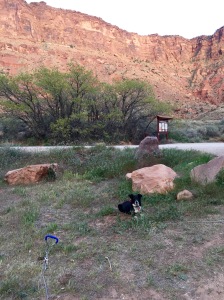 The wind was finally absent, we had made good time on the road, and in a setting so perfect, it was time to do some REAL camping! I cranked up the stove for another Spaghettios feast, made an ACTUAL fire in the fire pit, and found the perfect way to celebrate Easter on the road . . . Reeses Peanut Butter Egg Smores. People I am NOT joking-they are the bomb! You need these in your life. Happy Easter/Passover/Spring to you all (a bit belated).

3 thoughts on “Day Twenty One: On The Road Again: Colorado, Utah”