So my plan had been to get up and go see the sun rise over the hoodoos. Because sunrise over the hoodoos is supposed to be the bomb. But, as I may have already mentioned, getting up in the mornings when it’s chilly and I’m cozy and snuggly with a cuddly furball is a bit of a challenge. Bounding out of bed is never easy in the best of circumstances, and the hassles of going to the bathroom, having breakfast, and getting dressed are magnified in a campground, so I’m never that eager to face them. Suffice to say-the sun did indeed rise, but I was not there to witness it. BUT, I didn’t linger overlong with the cuddles as I had a very important appointment to make! 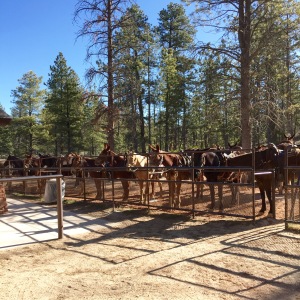 Yup! I was going to ride a horse down to the bottom of Bryce Canyon (and better, back up!) So it turned out there were only 3 other riders signed up-an early twenty something girl from France (sporting an American flag scarf-a dead giveaway she was a foreigner), and a couple from Switzerland. It was a little annoying that we were told in no uncertain terms to be at the corral by 9:30, and although a chaps-bedecked man was galumphing about down there, he didn’t even acknowledge us until 9:45. But no matter, our trail guide was to be a perky blonde named Nikki whose parents live in… Sterling VA! It’s a mad mad mad mad world. We bonded over cherry blossom nostalgia. And then we were off! (and also leaving) (Step Doug may be the only one to get that joke.)

The morning was glorious, sunny and not to cold or windy. The air smelled like fresh pine (except when Stingray in front of me there had some digestive issues). And the views grew even more stunning as we descended. 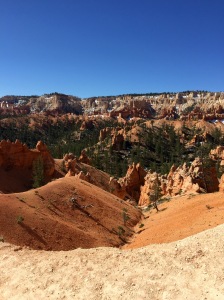 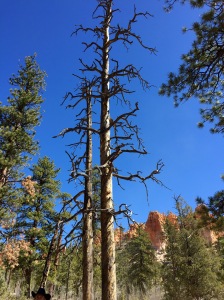 Me, astride my noble steed Dandy: 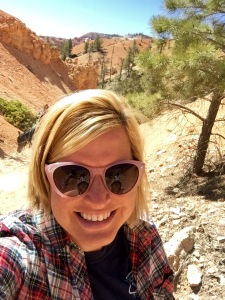 Our guide pointed out some of the lesser known formations… can you make out the ‘Naked Lady of Bryce Canyon” silhouetted here to the right? (It takes a bit of zooming in, and a lot of imagination.)

Perhaps due to a lack of total comfort with the language, no one else on the ride seemed to want to chat, despite Nikki’s best efforts to get us gabbing. I was usually the only one to laugh at her canned patter. When she asked if anyone had seen ET, referencing the likeness below, I was the only one who assented. Later on, when she asked if anyone had seen Mrs Doubtfire, I lied and said I had as I was starting to feel badly for her. 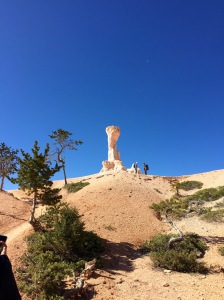 At one point a lonely little mule deer scampered into view and posed for a pic! 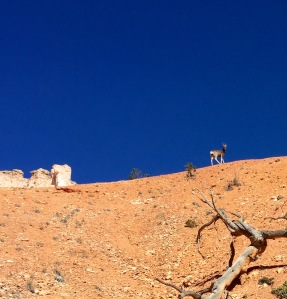 This tree may be even more Bad Ass than the one from yesterday. It’s a Bristlecone Pine, and is one of the oldest tree species around, and one of the few that can live in the harshest desert conditions. Just an inch in diameter of its trunk can represent a hundred years. The oldest one in Bryce has been estimated to be 1,700 years old.

This formation is known as Falling Rock, and as our guide painfully worked her way through her canned patter, she told us that she and “the boys” had been out earlier and propped it up with a stick so that it wouldn’t fall over and block the trail during our ride. As we rounded the bend, after only I had chuckled in acknowledgement, we could see a tiny twig propped under the overhang, which she said has actually been there for 30 years. 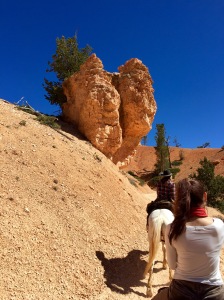 Nikki also clued us in to the fact that, due to the unusually high iron content of all the red sandstone surrounding us, the canyon is actually a literal magnet for lightening strikes. They actually have at least one fatality every year. Which explains the prevalence of these signs at every trail head. (Side Note: Make up your mind rule makers! If I can’t have my pet on the trail, then I’m going to be leaving my most valuable possession in the car, you can’t have it both ways!)

I could have ridden all day… well.. parts of me could, my backside was well relieved to say Adios to Dandy and crew. But after one last peek around, Annie and I were on our way out of Bryce. 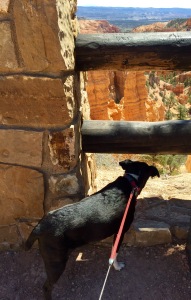 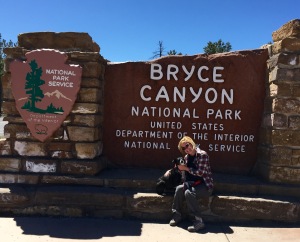 Just outside of the park proper is a conglomerate known quaintly as Ruby’s which is a hotel/RV Park/grocer store/gift shop/snack bar/post office/gas station/bordello (maybe not-I don’t really know for sure on that last one.) I stopped in to mail some cards and was confronted with this. Is this really a thing?! Please say it isn’t so.

Next on the rotating agenda of National Parks: ZION! (Yeah-I’m not digging the new pink sunglasses from the Bryce General Store either-the original too big sunglasses got misplaced in the Grand Canyon.) 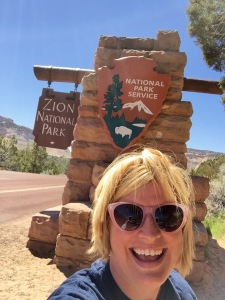 Zion is unique in that you’re observing and exploring primarily from the bottom of the canyon, rather than the top. It’s also just insanely beautiful and everyone should visit here. But first, you need to drive through a mile long tunnel. Make sure you have your lights on! 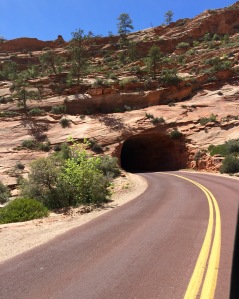 Soooo.. by the time we got to a campsite, which may well have been the last available campsite in the park, I initially had been told they were all full, I was kinda tired from the driving and the horsing around and such. And there was cell service at the campsite! So we lounged about for a couple hours and then decided to check out the Visitor Center and take a short hike. So I cranked up Marigold and then noticed I still had the lights on from going through the tunnel. I turned them off and drive five minutes to the Visitor Center. I was out of the car ten minutes finding the darn place and determining it closed at 5pm (FIVE PM? That’s ridiculously early). Got back in Marigold, and she wouldn’t start. The lights came on and the annoying seat belt bonger bonged, but not so much as a grumble out of the engine. Crapballs.  Luckily, I had brought along my portable battery jumpstarter for just such a situation. I lugged it out, hooked it up, and gave it a go. Nada. I started asking passerby if they had jumper cables. Of course not, everyone is in a rental car. I finally encountered one nice couple, Adam and Theresa. They were on their way somewhere, but promised to fetch cables from their car if I still needed help when they returned. I keep trying the jumper battery to no avail and meanwhile Annie is getting hot in the van and BARKBARK at all the confusion, and I’m hot too and still accosting randoms, and FINALLY two nice couples probably my ageish stop and they don’t have cables, but one of the dudes, we’ll call him Blue Shirt, is a real fixer kinda guy and after several suggestions go nowhere he scampers off to the nearby RV campsite to see if anyone there has some. In short order he is back with the cables. Annnndddd… the campervannie still won’t start. Crapballs redux. Blue Shirt now surmises the problem is the starter and his pal offers me a ride into town to look for a mechanic. Annie and I join the wives in their nice cool car as we wait for Blue Shirt to return the cables. But wait!! Blue Shirt returns with the owner of the cables, a real handy type we’ll call Shorty. (Because he was also in a blue shirt.) Shorty starts tapping on the starter and tightening cables and climbing all under and in and around the engine. Shorty is stumped as well. But before he will declare it the starter, he wants to run off and fetch a test light. OK-sure. Only now Blue Shirt’s compatriots have realized they got places to be.  Understandable. It takes all of my strength to forcibly pry Annie off the floor of their car where she has pancaked herself directly under the cooling vent. I am left with Shorty. But wait! All of a sudden Adam and Theresa return! I explain that I don’t need their cables as the problem is not the battery. Adam is also a problem solver and he and Shorty immediately fall into high level auto mechanic talk that goes way over my head. Discussing theories and eliminating variables, and continuing to poke and prod poor Marigold. We are about to give up, when Shorty decides he will hop in and take over my duty of cranking the engine. AND IMMEDIATELY THE VAN STARTS RIGHT UP! Whaatttt?!?!?! So, and I don’t fully understand this, but apparently it was NEVER the battery-the whole lights left on bit was a total red herring. Somehow I had inadvertently done something which caused the car to go into “Shift Safety Mode”? And it could only be started from neutral, not from park? Some sort of voodoo magic I will never understand, but we were as good as new! 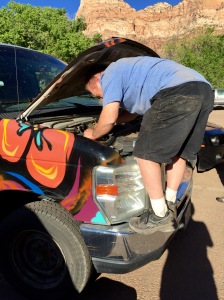 Additionally, while they were turning Marigold inside out, Adam discovered that the likely cause of my non-functioning refrigerator was a blown fuse just off the battery. Excellent! That won’t possibly be a pain and a half to resolve! (spoiler alert).

The whole debacle left Annie and me tired and stressed and cranky. We took an abbreviated walk, had our dinner, and conked out. 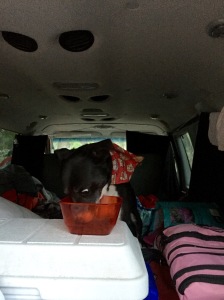 5 thoughts on “Day Twenty Nine: Been Through the Desert On a Horse with No Name : Utah (Bryce Canyon, Zion Canyon)”