The morning rose gorgeous and I wasn’t freezing when I took Annie for her AM constitutional for a change. Heaven. I had a leisurely (healthy) breakfast, chatted with the folks in the RV next door who were traveling with an adorable Mini Australian Shepard named Chaco after a nearby park, and even rearranged my “pantry” area. Word on the street was that the shower facilities were FIVE dollars and a big pain in the butt to access, so I decided to hold off on any grooming rituals for the time being. This would turn out to be a regrettable decision.

Annie and Marigold and I set off exploring, and the first thing we discovered is that everything in Death Valley is an exceedingly long ass ways away from everything else. Like, you think you have a handle on how far it is, but then double that.

Our first stop was the Harmony Borax Works. Borax, as you may or may not know, is a mineral found in dry salt lake beds and used in detergents and in fiberglass, and in making things fire-retardant, and a whole host of other stuff. It was discovered here in 1881 and the resultant efforts to mine and process it is sort of what put Death Valley on the map, and brought in the first non Native settlers.

Getting it out of the desert was a pain and a half (I’ve mentioned the long-ass distances, yes?) and was best done using a Twenty Mule Team Wagon (which would be more accurately called a Twentyish Mule Team Wagon due to fuzzy math, and was really more like plus or minus 5 from that number, and even if the number did land at twenty, that figure included two horses as well). The wagon wheels were seven feet high, they cold carry up to ten tons, and they traveled 165 miles across the baking desert (temperatures at Death Valley can reach 139 F or 59C in the summers). Good times.

The labor was primarily performed by Chinese immigrants and local Native Americans who lived in tents or basic structures here. They made like $1.60 a day and had to pay for room and board out of that. Good times. 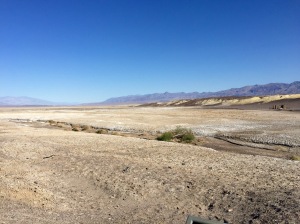 My next stop (35 miles down the road) was Scotty’s Castle. I don’t even know where to begin with this one. So Scotty was actually William Scott, a dude who used to perform in Buffalo Bill’s Wild West Show, and a bonafide original flim flam man. He got ahold of some gold nuggets from a mine in Colorado, and high tailed it off to New York City where he started telling investors he had struck gold in a new mine in Death Valley and just needed some grubstaking to get it out. He suckered many a wealthy man with this line, one of whom was named Albert Johnson. At one point, Albert came to California from his home in Chicago to see the operation for himself. Now Albert had previously broken his back in three different places after he was one of only two survivors of a gruesome trainwreck. So Scotty (as he was known) told Albert the mine was a 60 mile mule ride away. Albert was game. Scotty then arranged for some “bandits” to attack them en route but his brother ended up getting shot instead. Albert finally learned that the whole thing was a massive con, but was so enchanted with Scotty and his wild adventures that the two became best buds. He ended up building a Two Million Dollar (In 1930s money) castle in the middle of godforsaken nowhere which he lived in for exactly one month of the year, and let Scotty pass off as his own the rest of the time. 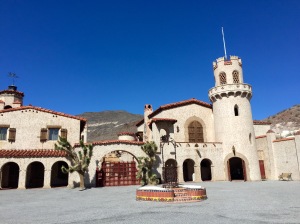 So I learned most of this fascinating history from my time period appropriate tour guide/ranger, Keith. Keith hails from a little town I like to call… ROUND FRICKING HILL VIRGINIA!! Yeah, he grew up about a mile from my house. Keith was an amazingly knowledgeable guide and funny and entertaining, and before Toni gets any ideas he called me Ma’am pretty much incessantly, so I think that’s a no go.

The castle is a marvel, from the intricately carved redwood beams in the celling to the Spanish tiles hand laid in the kitchen. 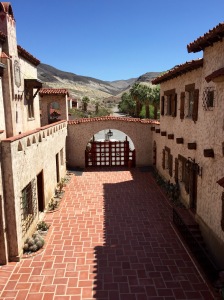 The legend over Scotty’s personal nook in the dining room (and by the way, the custom plates had both SCotty and Albert’s initials) reads ‘Oh what a story!”

Even the weathervane has an image of Scotty and his mining mule on it!

The music room had this ENORMOUS organ speaker thing (that whole wall on the right photo is the speakers) which sent anything that was played resounding through the desert. 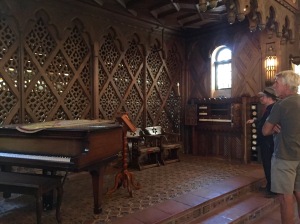 Albert’s 1914 Packard survived the scarp metal drives of both world wars, and is one of only four left in the world!

I could go on about Scotty and Albert all day, but there’s a lot more to get to! 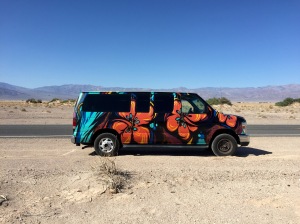 … until we got to Twenty Mule Canyon Road, where Annie and I enjoyed a three mile hike at the hottest time of day!

We took plenty of rest breaks… and then walked some more…

The last mile was along the highway which was less fun, and it took forever to see Marigold in the distance.

After some recovery time, we drove (and drove and drove) to Zabriskie Point which is a great lookout spot… if you don’t go late in the afternioon when the sun is low in the sky…

Next on the Must Visit list was Badwater Basin- at 282 feet BELOW Sea Level the lowest spot in the Western Hemisphere. The area is named for a small pool of salty water, that an early settler, upon noticing that his mule refused to drink from it, deemed “bad water” in his journal. The pool is surrounded by glowing white salt flats that you can walk along, and yes, lick if ye be so bold. (This was another “No Dogs” area, but sometimes you just gotta say what the “heck”. 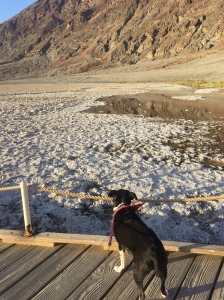 If you can enlarge this picture, about halfway up the cliff is a little sign marking sea level.

The place was gorgeous in the evening light, and I would have loved to linger, but I was already exhausted from overdoing it and still had one more item to check off the to do list.

Having been so enthralled by the stars the previous night, I had seen a Star Walk on the salt flats (not these, no, on some about 50 miles away from these) led by a ranger which I thought would allow me to see even more. And it did. Except that approximately 857 children showed up for this walk, and they enjoyed waving their flashlights around to screw up everyone’s night vision and constantly interrupting the ranger and talking over him. I don’t know how he kept his patience. But Ranger Jonathan was an earnest young man, not a tired and cranky old woman. He was the kind of lad who once drove all the way from Auburn Alabama to Jacksonville Florida because it was the closest place he could get a Slurpee. The stars were brilliant and I did learn some stuff, but it was a long 20 mile slog back to a collapse in the campground.

4 thoughts on “Day Thirty Two: And I Wanna Sleep With You in the Desert Tonight With a Billion Stars All Around: California (Death Valley)”