Did I forget to mention that the whole time I was sitting on the beach reading and waiting for Mary (and later hanging out with her) I neglected to put even a drop of sunscreen on? Well, it’s true. I’m terrible with sunscreen, and I think I thought because I’ve gotten a nice base layer from not wearing it in the cold desert then I’d be fine. I go through this every summer, I’m 45 and I still just refuse to learn. Anyhoodle-what this means is my knees and calves were pretty fried (and I was also exhausted by the end of the day yesterday), so I was moving slowly and creakily, and the prospect of any significant exercise was out.

I would also like to point out, that when I went to walk my dog around this fine quality lodging establishment Mary had secured for us, I MAY have inadvertently stumbled upon a drug deal in progress. What I thought were the housekeeping folks preparing to enter a room (at 7:30AM??) looked a lot more dubious when the plumber’s crack of one drew my eye to an array of pills spread out on the sidewalk.

Luckily, the one place I wanted to check out only involved an easy drive to access… up a really steep, really narrow road with no room for passing, and only the tiniest sliver of space to “park” your car once you’d reached it. But these were Mary’s problems. I was cool as a cucumber in the passenger seat for a change.

I had read about this cave on one of my dog friendly sites, and although it was blink and you’d miss it super tiny, and you have to peer in at them through a gate, the paintings that are there are brilliantly colored and fascinatingly bizarre. They are believed to have been painted by priests attempting to influence supernatural beings to assist them, and were created in different time periods, with new designs overlapping previous depictions. Scientists have used pigment analysis to date some of the images to the 1600s. 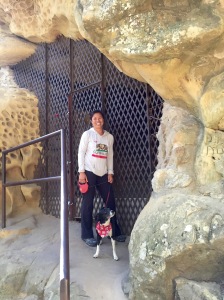 The area around the cave had some fun nooks and crannies and steep rocky trails perfect for the more able bodied of our party to explore. 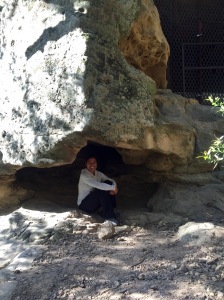 And, much to my delight, there was even a guest book to sign! 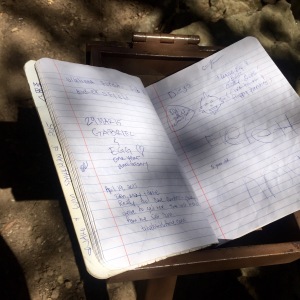 After that excitement, and once we’d survived the harrowing turn around and drive back down Death Road, we decided to go in search of a light hiking spot I’d heard of called Knapp’s Castle Trail. So, OK, this trail is all but impossible to locate, it’s not marked at all, and in attempting to find it we nearly wandered out onto a shooting range and a spot where some folks were having archery practice! We did see some magnificent views though. The pictures don’t capture it, but we were literally above the clouds. 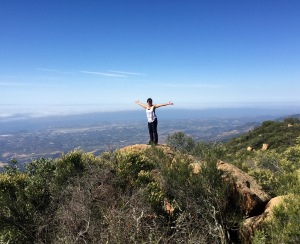 And FINALLY, after Mary took the drastic step of talking to some other people, FINALLY we found it!

It’s about a half mile walk to the ruins of an old mansion built by George Knapp, the founder of Union Carbide in 1916. The property was sold in 1940, and a world famous opera singer moved in. Only five weeks later the whole thing was destroyed by a forest fire and never rebuilt. Now it’s just some cool old stone structures with lots of fun spots to play around in. 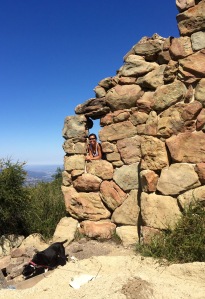 There was also a cool amphitheater type thing, but according to Wikipedia that was built by the current owner around 2011 before he was forced to stop for lack of proper permits. 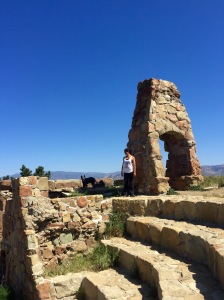 By this point, we were famished. A little internet sleuthing turned up the Summerland Beach Cafe, which seemed like it catered to our sort of clientele.

Indeed, everyone was pleased with their service. 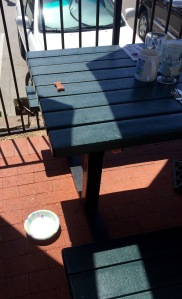 Then it was time to bid an all too soon farewell to Mary, how I wish she could have come with us through the rest of California. Still moving a little slowly, Annie and I decided to take a tip from Seth and head just a little bit north to the Danish town of Solvang.

Solvang was founded by Dutch immigrants, but looked just like every other California Cowboy town until the 1950s-after a magazine article came out trumpeting it as THE place to go to experience Old World Culture, the local tourism department decided they better overhaul the whole architectural feel from Spanish conquistador and California Craftsman to more of a Hans Christian Anderson vibe, with full on windmills and everything. 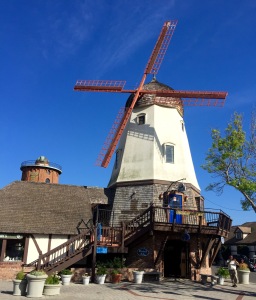 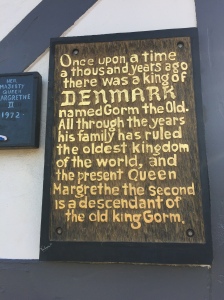 Speaking of Hans, The Little Mermaid is the town logo, and appears on everything, right down to the fire engines. Fun HCA fact: He also wrote The Snow Queen, which later evolved into Frozen, and if you say the names of some of the main characters really quick: Hans, Kristoff, Anna, Sven-it sounds like his name! I learned this bit of trivia on the Horse Drawn Streetcar Ride that Annie and I took… as the only passengers. Which sounded great at first, until I realized the tour ladies ENTIRE shpiel would be narrated directly to us and I would have to react to EVERYTHING rather than just staring out the window and taking it in. And that I would have to endure all of her awkward laughter and nervous mannerisms with no buffer. I couldn’t get off of there fast enough. 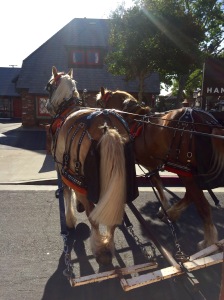 Afterwards we strolled around the town a bit on our own, and Annie was welcomed kindly at several of the stores. I wouldn’t let her go in the tiara shop though… 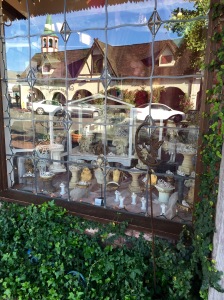 There were lots of cool Danish touches all around, especially if you looked up. Many of the rooftops have wooden storks nesting on them-said to bring good luck and protection to the household.

And this is a replica of a tower in Copenhagen – the four intertwining dragons at the base represent the unity of the four Scandinavian countries.

Speaking of dragons, it is (was) Sunday night, which means I’m springing for a hotel room so we can unwind with Game of Thrones and pizza!

OH! And before I forget (again)-these are photos of the lovely sunset that caused Mary and I to hang around Eli’s hood all evening yesterday. Some random lovebirds, and me with my best girl.

ALSO! It had been suggested that a Q&A session on the blog may be of interest, and I think that’s a great idea. So consider this your chance to ask me anything you’ve ever wanted to know (that contains some minimal bit of tangential connection to this trip). All questions should be posted in the comments section of THIS blog post only; not on FB or by text, or on another post (although if you have previously asked a question on a previous post, and I never responded, feel free to repost here.) You can ask anything, no question too big or too small. Pop it in the comments here, and I will be happy to respond.