The rain had stopped by the time we woke up, but it was still a bit gray and damp. The campground here crowds everyone in a bit closer than the ones in other National Parks, and I’m parked next to some clueless older men who have no concept of personal space, and even tried to tell me Annie was a bulldog (?!), but to the right I have only lovely views of pines and dogwoods in bloom. 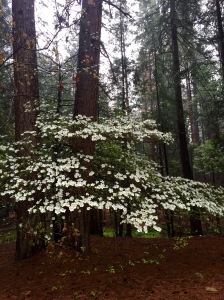 In trying to find a route to drive to a different area of the park, I stumbled upon the stables, and, since I enjoyed my ride into Bryce Canyon so much, thought it might be fun to repeat the experience here. Once again, the system needs some help. On the phone I needed to give my exact age and exact weight. Now I understand I likely need to be over 18 and under a certain poundage, but beyond that why the specifics of things many folks are uncomfortable providing? I’m not, but it still took me aback. Then I had to arrive an HOUR before the ride (in Bryce it was 15 minutes). They claimed it was for “orientation”, when in reality I spent 45 minutes of the time: waiting while they answered phone calls, waiting for the computer that processed credit cards to come back up, waiting for other people to fill out forms because you can’t fill them out while you’re waiting your turn, and actually having to get on a scale to confirm my weight. Then I spent 5 minutes watching a “safety” video that had the sound down to an almost unhearable level and basically said “You must wear the helmet that we require you to wear, and you might get hurt so don’t sue us, but you almost definitely won’t, so enjoy!” When I asked about the need for weight precision, I was told it was because the mules are so finely calibrated they are designed to carry a specific weight. Ten minutes later I was told to just go bond with the mules and just pick whichever one I wanted. Then, after I picked one and took selfies with it and everything, I was told there was a change and they needed that mule for someone else so I had to pick a new one. In the end, my original mule didn’t even have an assigned rider. All that aside, meet Samson! 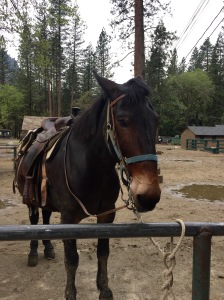 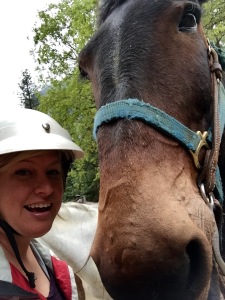 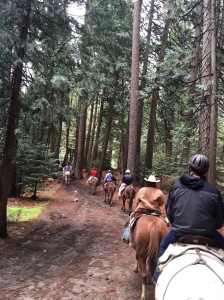 Including bear dens! (Bears in absentia)

We passed some nice viewpoints of Half Dome and Quarter Dome, but it was really too foggy to see them well.

And then, the highlight of the excursion. This was a ride to the acclaimed Mirror Lake, featured on many of the postcards in the Visitor’s Center and otherwise unreachable except by steep uphill hike or shuttle. And here she is… MIRROR LAKE! 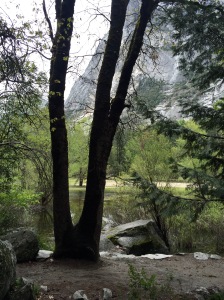 Whiiiiichhh is now pretty much a meadow. When I questioned the guide about this I was told it was a “seasonal” lake. So I asked what season was the prime one to see it, knowing the answer would likely be spring, which indeed it was. So then we are finally told that really, due to drought, and the fact that it was manipulated somewhat in the years leading up to the conservation movement, it’s actually now becoming a permanent meadow. Which, yay nature and all of that, but I kind of felt mislead if the whole route of the trail was to lead us to this WOW moment that doesn’t exist any more. *grumble grumble*

But there was some beautiful scenery otherwise, and I don’t regret the ride, I just think they should maybe play down the Mirror Lake aspect a bit or give a disclaimer. 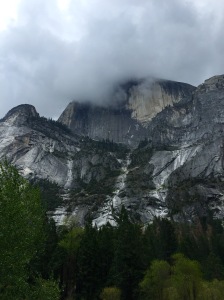 Anyhoo, as the weather was still decent, I decided to drive up to Glacier Point, which is supposed to have the best view of the entire valley. Along the way I passed some deer.

And I got to the top, and while the temps were significantly cooler, and the clouds hung low, it was truly a majestic view. 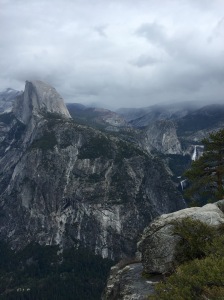 These are some views down into the Valley where I was staying, I could even spot my campground!

OK, so see the photo on  the left? And how those two rock outcroppings on the right kinda sorta look like boobs? Well this asshole in the green jacket in the other pic THINKS THATS HILARIOUS! I passed him at one overlook making those jokes, rolled my eyes and moved on. Then I drove to the next overlook, and there he was again, making the SAME jokes, in the face of stunning natural beauty which ne was totally ignoring. Ten minutes later I encounter him again, and he is doing the pose below where it looks like he is grabbing the rock boobs and making his friends take pictures. ENOUGH! Later, as I was leaving, he was once again in my path miming holding up his shirt and rubbing his nipples. I really wanted to push him off the edge. 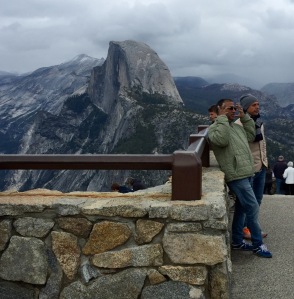 And speaking of pushing things over the edge. So, Glacier Point is basically the highest point in the park. And below it is an area of basically fancy tents on platforms called Camp Curry. And I had seen a couple of signs referencing a FIREFALL there with a picture that basically looked like a volcano erupting. So while I was at the gift shop up on the point I decided to ask the cashier what the heck that was. Well apparently, for like 100 years, they had this daily ritual where every night at 9PM, a park ranger would dump BURNING HOT COALS over the side of Glacier Point, and they would resemble a waterfall made of fire as they fell, and all the residents of Camp Curry (and loads of others) would gather in a meadow across the street to watch. What could go wrong?! It happened that there was another guy in the souvenir shop who had been there and seen it and said it really was as awesome as it sounded. I am flabbergasted that as highly regulated as the National Parks are today that this was an officially sanctioned activity. And I would give almost anything to have seen it. Apparently it was stopped in the late 1960s as the parks moved away from anything not strictly a “natural” phenomena. We make do with this dramatic recreation.

Only YOU can prevent forest fires (BY NOT DUMPING FIRE OFF THE SIDE OF A MOUNTAIN!) 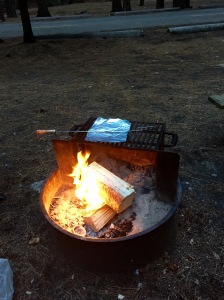