The old dude was right, it did get very cold that night. And was still chilly in the morning. But the campsite was beautiful and not a bad place to sit and write a few postcards over oatmeal. 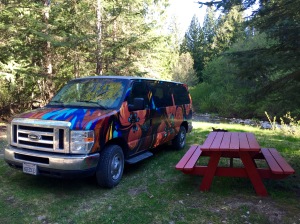 And there was a nice trail running along the river that we could hike along after breakfast.

Today/that Sunday (I am terrible with my tenses when I’m writing from the future) was Mother’s Day here in the U.S. For those that don’t know, I lost my Mom, who was my best friend and an amazing woman, very suddenly five and a half years ago. And while I have thought of her often on this trip, and missed her, and longed to share it with her, and imagined her reactions to certain things, today hit me like a ton of bricks.

Mother’s Day is always a tough one for me, not just for the ever present mentions of moms, but more so because we had developed a tradition over the last years of spending the day together browsing various nurseries and garden centers so that I could buy her plants with which to fill her garden. And those were always some of the best times. Anyhow, I had foolishly thought that I could “hide” from the occasion this year – off in the middle of nowhere with few reminders. But, once again, I was wrong. And floods of memories came back on that riverside walk.

I pulled myself together and loaded us back into Marigold, as it was time we were off on our way to Montana. Driving out of the campground, these happy little fellows ran up to escort us down the road.

We were driving along and I knew the Montana border was not too far down the road, so I was trying to be vigilant, but suddenly I saw signs for Kellogg, and I was CONVINCED that Kellogg was in Montana (I was assuming it was the Kellogg of cereal fame, which is actually based in Michigan, which is not at all Montana, but does start with the letter M). (Side Note: This Kellogg was founded by a gold prospector whose donkey wandered off one morning and he found it near a large lead outcropping and built the town up around it. The city motto is LITERALLY “Founded by a jackass and inhabited by its descendants.”)

Anyhow, as I was SURE I had missed my chance to take a photo of the Welcome to Montana sign (which I have tried to do for every state I pass through), I decided to pull over at the nearest opportunity to check where indeed I actually was. Luckily there was a McDonald’s just off the freeway, and I knew that was somewhere I could park for a bit without arousing suspicion. And for whatever reason, all the sad feelings came back and suddenly I found myself crying in a McDonald’s parking lot. Which is a rather pathetic position to find oneself in. But my dear friend Allyson happened to call about then and managed to cheer me up a bit, and I looked around and decided that if one had to be crying in a McDonald’s parking lot, at least it was one with an excellent view.

I have no idea why the flag was at half mast, but I decided it was for my mom.

Montana has a colorful, yet near illegible Welcome sign, that they have curiously posted above the highway, rather than off on the side as almost every other state does. Nevertheless, I got my photo.

Montana lived up to the hype I had been given as yet another in a long line of scenically stunning states.

Alas, Annie has become a bit jaded to it all by now.

I faced another directional dilemma. Originally, I had blocked out two days of time at this point of the journey to potentially visit Glacier National Park, weather depending. Glacier is supposed to be magnificently beautiful, but it would be two hours out of my way in each direction to get there, and, as it is located in the mountains of the far north, the main road through it would only be partially plowed. My other option was to visit the closer, but less iconic, town of Hot Springs, where there was rumored to be a cool old motel from the 30s that had mineral water baths in the rooms.

I kept wavering back and forth, even using an app on my phone to flip a coin. Finally I realized that I would basically have to drive through Hot Springs on the way to Glacier, so I decided to stop there first and see what sort of vibe I got. As soon as I pulled up outside Alameda’s, the motel, I knew this was where I needed to be.

The place had the feel of one of those endless summer days spent in the country with nowhere to be and nothing to do. It seemed like a place where time slowed or maybe even stopped. And I could definitely feel the healing energy. When I went in to register, and saw a photo of the late Alameda, I knew I had chosen right.

While that was the image I had in my head of what the proprietor of this establishment should look like, the current, self-described “live in gardener and manager of the month” was another matter entirely. He was of an indeterminate age somewhere between 29 and 47. He was tall and lanky with filthy looking white guy dreads, dime-sized dots tattooed beneath his eyes, those horrid spacer earring things, and was dressed in a t-shirt and shorts that were an identical dirt tan color and/or had never been cleaned. He was an interesting dude who apparently grew up in Maryland, then moved to Hollywood, then came to Montana and found himself employed in a position for which he had zero previous experience, but was ready to move on, and thought his next stop might be moving to Ecuador to help deliver babies. Of course he’d never actually been to Ecuador before, and I’m guessing baby birthing requires some sort of minimum cleanliness standard, but shine on crazy diamond!

I wish I had his photo, but there was no way to get one without arousing curiosity. Later in the day, as I was sitting on the porch reading my book, he came over and offered me the “single woman traveling alone free glass of wine special” along with the opportunity to come watch him walk a low-level tightrope he had strung across the property, but I demurred.

Instead I took a tour of the town, which seemed to be both stuck in the 1930s and not to have turned a profit since then.

The bakery that all the reviews of the motel on TripAdvisor said I HAD to try was vacant and for sale.

I even stumbled across a sad and depressing version of a Campervannie. 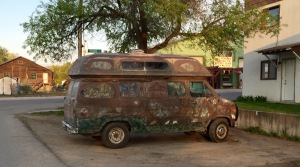 The vibe in the town was doing nothing to improve my mood, so I retired to my quarters which were brimming with old timey charm and included a cute kitchenette with tiny old refrigerator, lounging area, breakfast nook, and huge soaking tub. 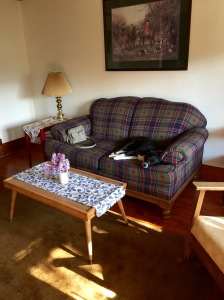 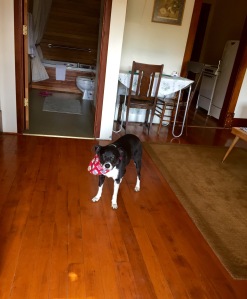 But my favorite spot by far was the wide front porch surrounded by trees and shrubs, with comfy chairs to sink into and let the chirping birds and shining sun work their soothing magic. 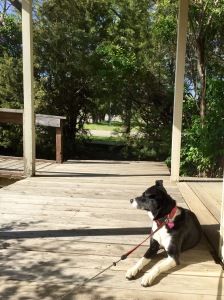 3 thoughts on “Day Fifty Six: A Mother of a Day: Idaho, Montana”