Events of Tuesday, May 12th, blogged Monday May 18th

Even though the day was overcast and gray and I couldn’t wear shorts like I could the day before, I felt better and brighter. I took a shower in the mineral water, which I may have neglected to mention smells like rotten eggs, but as I learn again and again on this trip, a nice hot shower cures a lot of ills.  It was time to pile back into Marigold and be on our way. 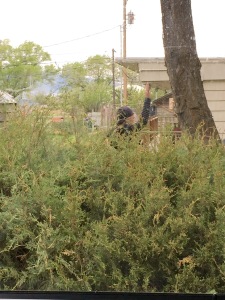 Bye bye random tipi on a random side street!

And Hello to a loong drive across Montana! 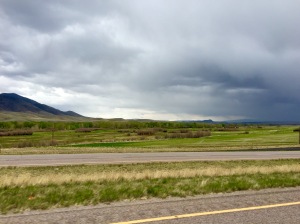 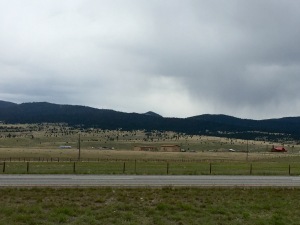 Hello quaint little Western town of Dillon where I stopped for lunch during a rain shower! 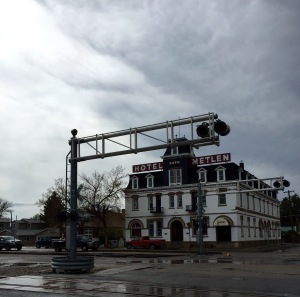 Hello quirky little second-hand shop with a fantastic garden filled with bric-a-brac and treasure, that sadly had closed for the day while I was eating lunch, and that also appears to be for sale, so someone please stop me before I decide to make my next career running a second hand shop in Dillon, Montana!

Tell me this place doesn’t have Eden written all over it!

Why does every town in Montana feel the need to make its presence known via a giant letter on the nearest hill?

Hello Testicle Festival! (The giant billboard advertising it flew past too quickly for me to snap a shot, so please accept this copy of their poster as a substitute.) For the uninformed, the Testicle Festival is a multi-day event, centered on the consumption of fried cow testicles. There may also be turkey testicles available for those with smaller appetites. 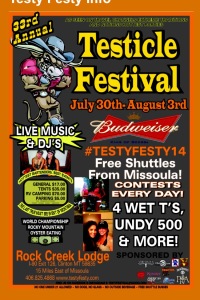 And Hello Bannack State Park – our final destination for the day!

Bannack State Park was a must visit because it contains and protects an actual Ghost Town, preserved as it was when it was left, and not all tricked out for tourists. AND they even allow dogs to wander through the town, including inside the buildings!

Bannack (poorly named after the local Bannock Indian tribe) made it onto the maps in 1862 when gold was discovered there. In 1864 it was named the first capital of the then Territory of Montana. The population ebbed and flowed as some gold sources played out and then new mining techniques allowed different sources to be tapped. At its peak there was a population of 10,000 people living in this very remote section of the state, accessible only by the Montana Trail. Though the last residents didn’t leave until the 1970s, the town’s heydey was basically over by the turn of the century.

We rolled in to Bannack later in the day, as the sky was darkening and the winds becoming blustery, adding to the spooky and abandoned vibe of the place, so we only poked around a short while (long enough to determine that while Bannack may be devoid of people, there is clearly a MASSIVE population of bunny rabbits and chipmunks, because Annie’s nose was in overdrive sniffing under every slat on the boardwalk and every house foundation). We made plans to explore further in the morning and headed off to make camp beside the very creek that miners once panned for gold in. It smelled like juniper. 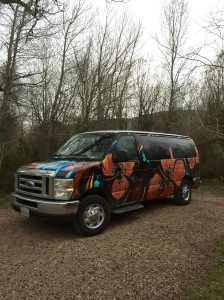