The morning dawned sunny and blissful. From my first whiff of the ocean air last night I wondered why I had bothered with anywhere else. The whole time I’ve been traveling, I’ve seen many gorgeous and interesting and inviting locales, but nowhere I really felt like I could call home. And the sight of the sea was a light bulb flash in my brain-I need to be near the water. I love the smells and the sights and the feel of the breeze and just everything about it. So this campground at Carpeneteria Beach may have been the second least rustic I’ve visited (behind that KOA), and Marigold may have been crammed cheek to jowl with dozens of giant hulking RVs (one of which even had a flat screen TV built into the OUTSIDE), but there was a view of the waves, and a short walk to dip my toes in the water, and it was heaven.

And then. I was propped awkwardly in the front seat working on a blog (the glare was too strong to do it outside), when a woman knocked on my window. I rolled it down, and she smiled and handed me this… 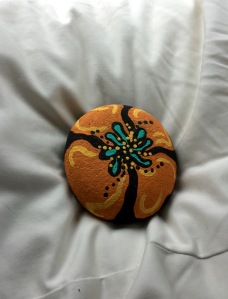 A total stranger, with whom I had not previously so much as made eye contact, painted me a rock with a Marigold flower on it! I was (and am) speechless. Blown away. I had noticed her earlier with her head bent over some paints, and thought that was a pleasant way to pass the time on a pretty morning. Pam explained that they came to the beach a lot, so to pass the time she started painting rocks. And eventually she had more than she could ever want, so she started giving them away. And that my crazy campervannie had inspired her. And now I have only the most perfect souvenir ever. It’s a portable decorative reminder of Marigold and the beach and all the amazing people I’ve met or learned of. Plus, every time I show it to someone, I can say “That trip ROCKED!”

And in a blink she was gone, and Annie and I pulled up stakes (wheels?) and drove a bit north to  the dog friendly Arroyo Burro Beach. Where we enbcountered a huge line of cars snaking through the parking lot, and I realized how foolish I was to attempt parking at a beach on a gorgeous Saturday afternoon. And then fate smiled for like the 500th time, and just as all the cars in front of me drove past like the best non handicapped space in the lot, a man pulled out of it and in we zipped!

Now while this may have been a dog friendly beach, I don’t exactly have a beach friendly dog. Annie resisted dipping her paws in the Pacific as strongly as she does the Atlantic. 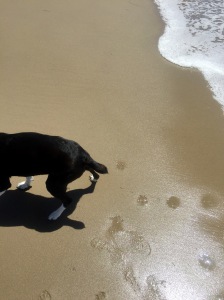 But she did enjoy sniffing odd things…

And hiding under my chair while I read in the sun… 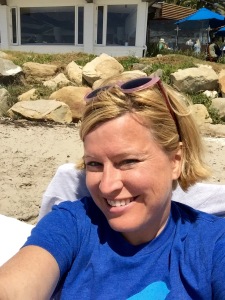 But wait.. what’s that-do you see someone heading toward us Annie? 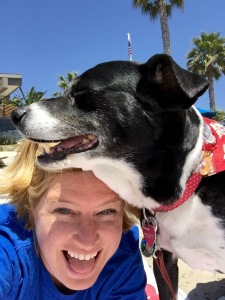 IT’S MY OLDEST BESTEST FRIEND MARY WHO I’VE KNOW SINCE WE WERE ELEVEN YEAR OLD GOOFBALLS! 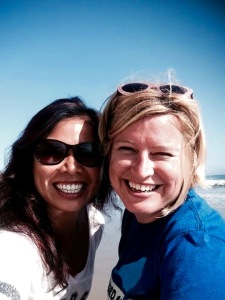 Mary lives outside of San Diego now, so we don’t get to see each other that often, but she is one of the greatest women I know, and our friendship always picks up right where it left off-she is my role model!

So-we take a little walk along the beach, and I try to demonstrate Annie’s aversion to the waves, but in true Annie fashion she makes me look foolish by walking right in…

And then, Mary decides to put her purse in my van. And as we walk over, this guy stops and says to Mary “Don’t I know you from somewhere?” (oldest line in the book) They chat a bit, turns out he’s a waiter at the restaurant on the dog friendly beach which… doesn’t allow dogs (???) , and Mary asks him to take this picture of us…

Which is the first time in five minutes he’s even remotely acknowledged there was another human being in the vicinity. He gives me a passing grunt and then carries on with “Do you go out socially?” “How long are you in the area?” “What are your plans while you’re here?” I mean he is GAGA and Mary is CLUELESS and I could have immolated on the spot and he’d not have noticed.

So we finally manage to shake him, and spend an hour or so chatting and laughing and being silly and strolling the beach and watching all of the other dogs frolic happily. And then we get a bit peckish, and it’s growing late and we decide we’d really like to see the sunset, so it really makes sense to have dinner here at the beach restaurant. Where Eli works.

And of COURSE he’s our waiter, and of COURSE we (or one of us at least) gets the most attentive service ever. And he gushes about what a great evening this is and how glad he is to be a part of it and how thrilled he is that we came in. And the food and drinks really are exceptional. Shout out for pork belly and scallops which I never would have thought to combine. 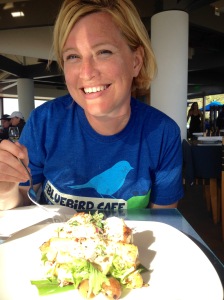 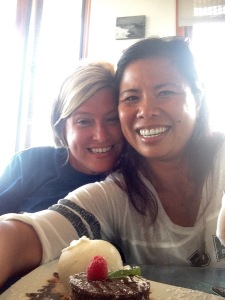 By the end of the meal I need to use the ladies room. Which has a line. Which allows me a perfect vantage point to see Eli SWOOP in and start chatting animatedly with Mary. Before too long I see him scribble something on a piece of paper and hand it to her (as I had long ago predicted would happen, despite Mary’s strong denials.) I pop into the loo, come out, begin to head back to our table when I see him return. I immediately hop back to the front of the bathroom line without thinking. Then the guy, who had been behind me in the coed line earlier jokes “You’re BACK in the bathroom line… and you’re CUTTING??” So I explain about Eli and Mary and how he has been all over her and hasn’t so much as glanced at me all night.  And then the woman who had entered the ladies room after me comes out and says “You’re in the bathroom line AGAIN?!” And by now everyone thinks I have digestive issues or poor bladder control, but it is SO worth it, because Eli goes in for a HUG!

I finally go back and Mary is FURIOUS (not really) that I’ve left her alone to Eli’s advances, bur sacrifices need to be made for the cause of a good blog post. So yes, he asked for her number, and instead of saying she was involved with someone, she asked for his, and then he just said “I’m going to hug you.” and DID it! And did I mention Eli is a good ten years younger than us, and the beach was overflowing with twenty somethings in micro bikinis? But Eli knows quality when he sees it. And despite the best efforts of Allyson and Toni and others, everyone on this trip is getting action but me.

And then as we are crossing the parking lot and headed to Marigold, someone taps me on the shoulder and calls “Hey cutie!” and Mary is all excited until I explain it’s just the (probably gay) guy from the bathroom line being silly. (And quite clever.)

So we head off to the Motel 6, where my ultimate bed mate is waiting. 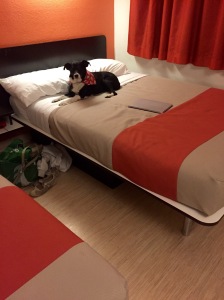